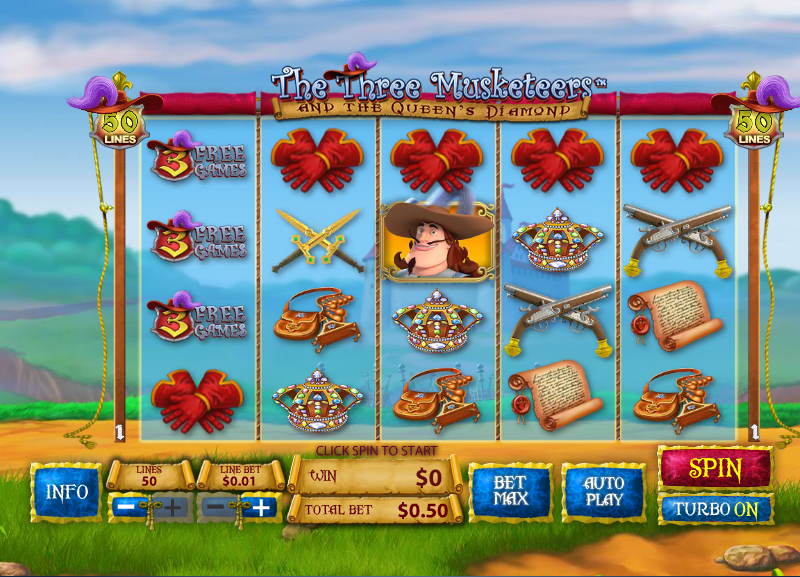 Playtech are producing some top quality online slots at the moment and if you don’t believe us just check out Fortune Hill as one of a number of examples. This full title of this latest one is The Three Musketeers and the Queen’s Diamond and of course it features the legendary French heroes as they search for royal goodies. It’s also packed with clever bonus features.

The Three Musketeers plays out over five reels and fifty paylines and those reels are set in an ornate, Gallic frame through which you can glimpse some French countryside. The basic symbols are musketeer accoutrements such as a satchel, red gloves, daggers, swords, pistols, a crown and a diamond.

The four musketeers (including Dartagnan) each activate their own bonus feature, there’s a Free Games symbol and a bright yellow Wild which can be stacked and appears on reels two, three and four.

This is where Dartagnan helps out and you will need to land him on reels two and four to trigger this feature. You will now help him on a journey to find the Queen’s diamond by selecting the correct path in five different areas. You begin with two lives and lose one for each mistake made but it’s possible to pick up more lives along the way.

The further you progress, the more you win as you can see from the video below.

There’s a bonus associated with each of the three original musketeers as follows:

During the spins the Free Games symbol appears on all reels and will award three more spins each time you land it. All the other bonuses can also be triggered from within this feature.

All the bonuses are triggered by scatter symbols so you don’t have to be playing all fifty paylines to activate them; your prizes will be proportionately less though.

This is a fantastic slot right from the funny intro movie to the great graphics and animations and then on to the numerous bonus features. Playtech have got everything just right here and you really should check this out.