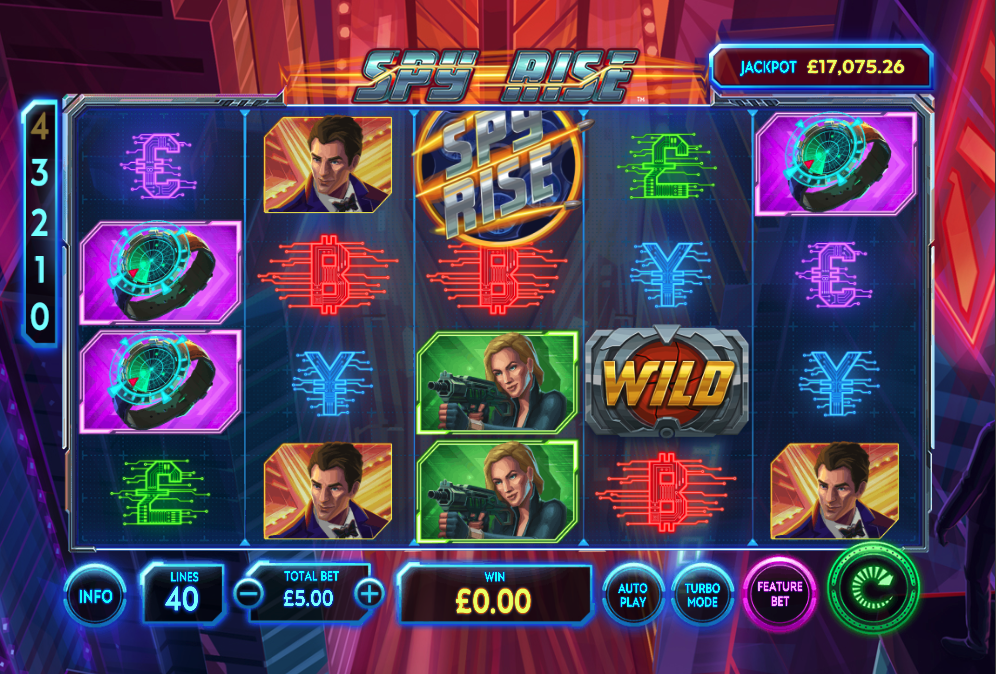 The risky world of currency exchange combines with international espionage in this fast-moving online slot machine from Playtech; it’s called Spy Rise and it offers players a shot at a progressive jackpot, some free spins and an opportunity to upgrade symbols for a small cost.

Spy Rise is a five reel slot with four rows and forty fixed paylines; the design is all about glass skyscrapers, glamourous participants in this game and a high tech feel to proceedings.

The higher value symbols comprise the male and female characters in this story, a fast car and an expensive watch; lower values are currency symbols including the Bitcoin, US Dollar, British Pound, Japanese Yen and the Euro.

The golden ‘Wild’ is wild and it will replace all standard symbols to help form winning combinations; the Spy Rise logo is the scatter symbol.

This is an optional extra and enables players to select high value symbols to upgrade for a fee after which they will be more valuable:

As you can see the higher the level the greater the percentage return on the stake.

Landing three of the Spy Rise scatter symbols anywhere on reels one, three and five will award ten free spins on a set of reels which will pay in both directions. There are no scatter symbols in play during this round so it’s not possible to retrigger it.

Look out for reels which land with a red background because these are the key to prizes:

Cryptocurrency finally makes its way onto the reels in Spy Rise and it adds an air of edgy modernity and technology to proceedings; the blocky graphics and cartoon style animations fit theme very well. Free spins and a progressive jackpot? Why not?