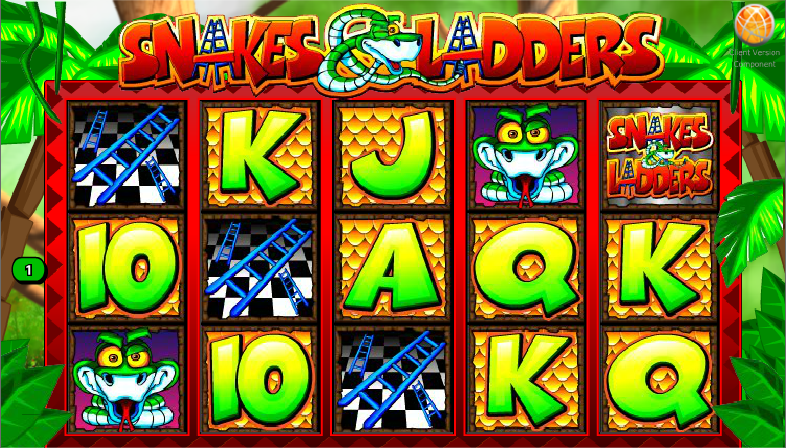 This is not the first Snakes and Ladders-themed online slot we’ve played and it almost certainly it won’t be the last. That’s fine as long as the quality is high and this particular version is developed by Mazooma Interactive, the company behind games such as Cops and Robbers and Little Devil Deluxe so read on to find out more about this tribute to a famous board game.

Snakes And Ladders is a bold and colourful game which plays out over five reels and twenty paylines; there’s a real cartoonish atmosphere to proceedings especially when it comes to the symbols and the backdrop to the reels is a leafy jungle scene.

10, J, Q, K and A are the basic, low value symbols but higher up the ladder we have theme-related symbols such as dice, a ladder, a snake and a stone mask.

There’s a big ‘Wild’ symbol and three bonus icons – a snake in a basket, a colourful coiled snake and the game’s logo – each of which are associated with different features.

You will need to land three, four or five of the snake in a basket scatter symbols to trigger this mini-game and when you do you will be offered the chance to pick one of those snakes. It will reveal a prize proportionate with your stake.

Landing three, four of five of those colourful coiled snakes anywhere in view will grant you 15, 25 or an impressive 100 free spins respectively. There are no multipliers for your wins but you can re-trigger the spins up to a maximum of 210.

Fortunately with this slot you will get to play a short version of Snakes and Ladders and to do that you must land three or more of the Snakes and Ladders logos anywhere on the reels. Three is enough but the more you land the higher the prizes on the board will be.

All you need to do is keep rolling the dice and moving around the board until you land on a multiplier prize amount; then the game is over.

All the features are triggered by scatter symbols so it’s possible to trigger them while playing with just one payline – ideal for low rollers but the prizes will be lower.

This is a fairly entertaining game, despite it’s rather basic graphics. Lots of bonus features mean it’s ideal for players who like that kind of thing.