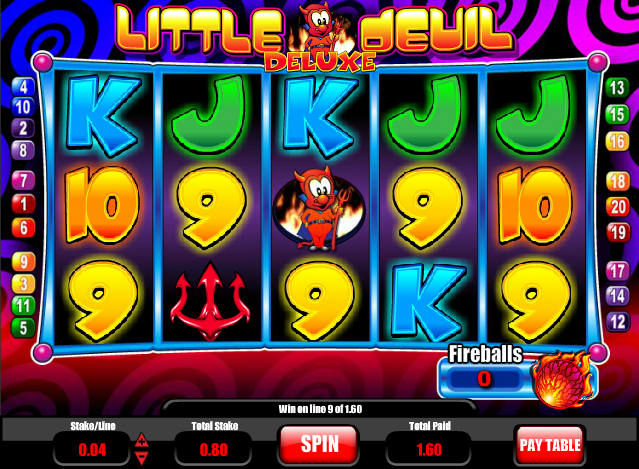 We haven’t reviewed many games from Mazooma Interactive in the past but that may change if the games they produce are as addictive as this one. Little Devil Deluxe is an online slot is a cheerful and colourful little game with that rarest of things – a guaranteed bonus game.

Little Devil Deluxe takes place over twenty fixed paylines and five reels; the main character is the little devil himself but there’s a psychedelic backdrop to this game which adds some technical stardust to the proceedings.

There’s not too much imagination in the symbols with the majority the standard playing card icons but the highest value ones are a trident and a Little Devil logo.

There are three bonus symbols though, a funky wild, the Little Devil himself who triggers the free spins and then the Fireball which is part of the guaranteed bonus feature.

This is what we’ve been calling the guaranteed bonus and you will notice the Fireball counter underneath the reels; as soon one lands on reels two, three or four it will be added to the counter and the first one you collect will start the 3:45 countdown to the feature.

Hopefully you will collect several other Fireballs before the time runs out and then the next spin following the end of the countdown will kick off the bonus. This is a pachinko-style game where you fire the projectile to the top of the screen and let it drop into one of the multiplier holes below. After you press the ‘Fire’ button, it will all take place automatically. Check out the video below to see it in action.

Landing there or more of the Little Devil symbols on the reels will trigger this feature and all you have to do is pick one of those little chaps; he will reveal a certain number of spins which will then take place automatically.

All wins during this feature are tripled and so are the fireballs so this can be a very worthwhile reward.

Once the countdown has started, there’s a real motivation to spin the reels as fast as possible to try and collect more fireballs; don’t let this rush spoil your enjoyment of the game but don’t go and make a cup of tea in between spins either.

We’re fans of this type of game and it will appeal to players who like to play the bonus features; the graphics are basic but cheerful and the sound effects are quite endearing.