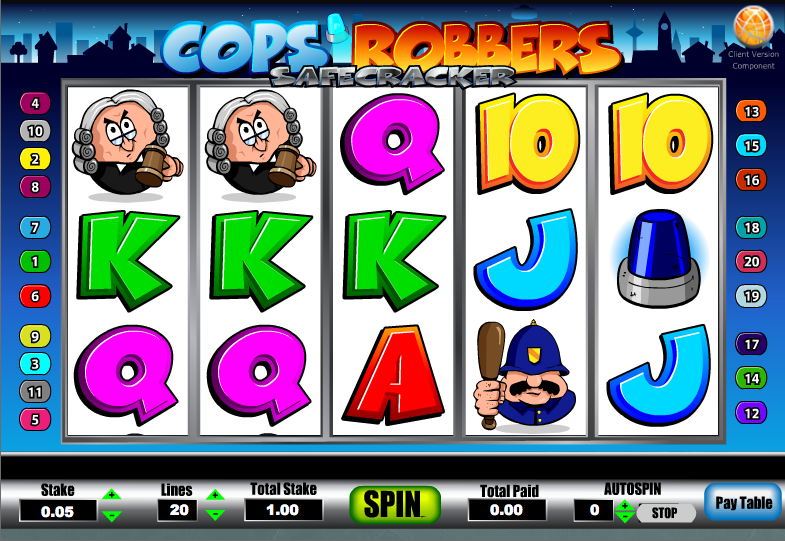 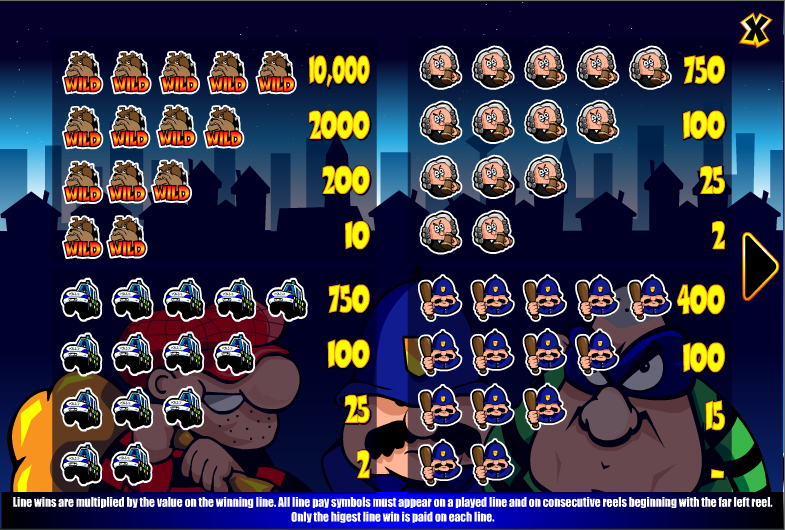 There’s no shortage of crime-based online slots available if that’s the type of game you line to play and now there’s one more to add to the list with Cops And Robbers from Mazooma. It’s a cute-looking game which adds some humour to a subject which is often not that funny.

Cops and Robbers features twenty paylines spread out over five reels and the narrative is one of a crime followed by the efforts of the cops to catch the criminals. The mains symbols are all them-related and so there’s a police car, a copper, a judge and a female officer.

A bulldog is the wild symbol and there are three scatter symbols which trigger the various bonus features – a safe, a police car blue light and the game’s logo. The wild symbol will double any prize to which it contributes.

This is a brief one and it’s triggered by landing three, four or five of the safe symbols anywhere on the reels; all you need to do is pick one of those symbols to reveal a prize.

Those blue lights are the key to the spins and if you land three, four or five anywhere on the reels you’ll earn yourself 15, 25 or an amazing 100 free goes. All wins will be multiplied by 5x while playing this feature and you can keep re-triggering the spins until you reach a limit of 210.

This is the best bonus feature and it’s a small board game which is activated by landing three or more of the Cops & Robbers logos anywhere on the reels.

You’ll be taken to a board who’s squares are filled with multipliers and you must now roll the dice to move. Each move will land you on a multiplier which will cumulatively increase you prize but there’s a cop chasing you; as soon as he overtakes you you will appear in an ID parade – if you are picked the round is over but if you get away with it you can head back to the board for some more moves.

All the bonus features are triggered by scatter symbols so you can play with as many or as few paylines as you like with the same chance of triggering them.

The graphics are pretty basic but there are enough bonus features to make up for any deficiencies and this slot is certainly worth a few minutes of your time.