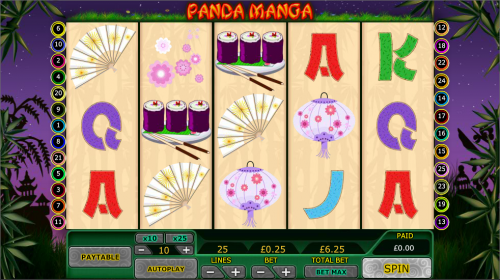 We’ve reviewed a fair number of Japanese-themed slots in the past and they all tend to stand out when it comes to the quality of the graphics – Geisha Wonder and Tiger Moon are two of the more recent; Panda Manga adds to the genre and it’s a ridiculously cute online slot featured at Random Logic.

Everyone knows what Pandas are but if you’re not familiar with the term ‘Manga’ then we’ll briefly explain that it’s a style of comic art which originated in Japan in the late 19th century. When you play this slot you will notice that it’s of a very specific artistic style and while comic book aficionados may argue that it’s not really Manga, it’s not far off.

Panda Manga features five reels and twenty five paylines and it’s set against a background of a purple sky fringed by trees.  Spirit houses are just visible in silhouette to the right and left of the reels.

J, Q, K and A are the basic symbols but a range of beautifully-drawn pictures represent the higher values and these include purple and white flowers, a fan, a paper lantern, sushi, some Kanji script and a Japanese doll.  The waving panda is the wild symbol and the mountain top temple is the scatter which activates the bonus feature.

Who wouldn’t want some free spins? Not us and we’re pleased to say that they’re available in this slot.  You’ll need to land three or more of the temple scatter symbols to trigger it and then you’ll be rewarded with eight free goes.

That’s not a bad start but  it gets better – the panda stays wild but the doll, the Kanji script and sushi all become wild as well, dramatically increasing your winning opportunities.  It means that one third of the symbols on the reels are now wild and those are good odds.

The slot opens with some lovely Japanese music while the panda hangs in the bamboo trees and that sets the scene for what is a really nice game.  We’re still working on what the Kanji script means but we know it’s not ‘panda’ – if anyone can help please drop us a line.