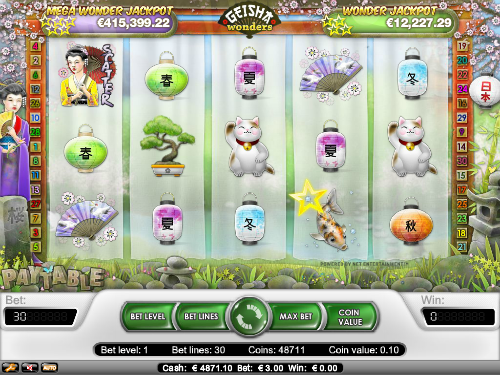 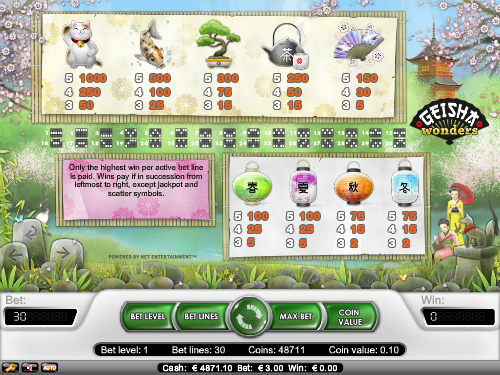 The world of the geisha is ancient and mysterious and one that’s made more so by the fact that it’s almost exclusively a Japanese phenomenon.  Geisha are female entertainers capable of playing music, dancing and traditional hostess duties and you can read more about them here. Net Entertainment have now used the theme of the geisha to create an online slot machine which manages to be fun to play and relaxing at the same time.

It’s a five reel slot featuring thirty paylines with a fantastic minimalist soundtrack which bursts into oriental life when you land a winning combination.  The reels are set in a wooden frame which itself is surrounded by Japanese paraphernalia such as lotus blossom and spirit houses.

Kanji characters on paper lanterns are used for the low value symbols and because we don’t speak or read Japanese we’ll describe them by colour from low to high worth – blue, orange, purple and green.

High value symbols are beautifully-drawn pictures including a traditional fan, a geisha’s tea set, a bonsai tree, a Koi carp and or course the Maneki Neko – the waving cat we all recognise from our local Chinese takeaway,

Special symbols are a Buddha wild, a geisha scatter and stars which can win you the giant progressive jackpot.

By playing Geisha Wonders you will automatically be playing for one of Net Entertainment’s progressive jackpots; a tiny portion of your stake will contribute towards the prize and there are two available.  The Wonder Jackpot can be won by landing four of the jackpot stars on an active payline and the Mega Wonder Jackpot can be yours if you can land five stars.

The free spins round can be triggered by landing three, four or five of the geisha scatter symbols and achieving this will reward you with 10, 20 or 30 spins.

During this feature you can trigger more free spins by landing more scatters and all your prizes will be subject to a 2x multiplier.

Geisha Wonders is a really lovely-looking slot which does a pretty reasonable job of capturing the essence of Japanese culture; the lines are clean and the soundtrack is relaxing – you could almost click autoplay, leave this running in the background and go and do something else while listening to the music.