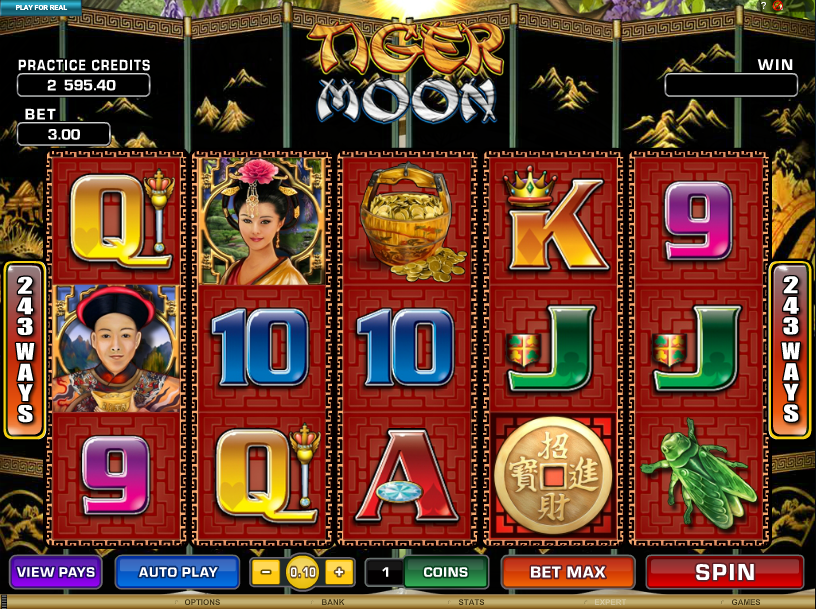 Tiger Moon is a new slot from the Microgaming production line and it joins several other online slot machines in tapping into a fascination with the Far East. There’s definitely an oriental style to the design of the game and the soundtrack contributes to the overall effect.

It’s a five reels slot which features Microgaming’s 243 Ways To Win and the backdrop to the game is a black and gold room divider painted in a distinctly Japanese way.  The lower value symbols are the standard playing cards (9, 10, J, Q, K and A) but higher up the scale we have a basket of gold, a jade insect and male and female characters.

A Chinese coin with a a square hole is the wild symbol and the scatter is the tiger of the title.

The main bonus game is triggered by landing three, four or five of the tiger symbols anywhere on the reels during standard gameplay for which you’ll win either 8, 16 or 24 free spins.

That’s a good start but it’s the wild symbols that can win you the money here; they only pop up on reels two and four but offer the following multipliers:

As you can see from the video below we marginally successful on this occasion but other bonus rounds worked out better.

If you’d like the opportunity to double your most recent win then select this option and you’ll get the chance to take part in a red/black choice; pick the correct colour and you’ll win twice the amount staked.  Pick the correct suit and you can win four times the stake.

Standard paylines are dispensed with in this game as Microgaming uses this method to determine wins; as long as symbols are in adjacent reels then you can make a win – we find you tend to get more regular but smaller wins in games that use this feature.

Fans of all things oriental will appreciate the design, music and sound effects of Tiger Moon but there’s enough bonus features and quality graphics to keep most people amused.