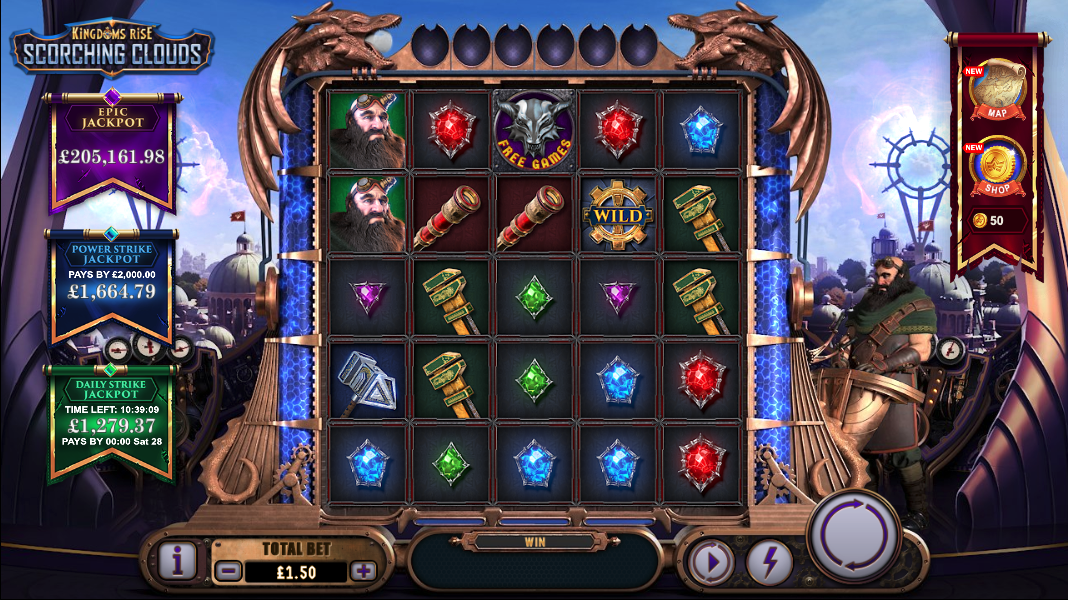 Playtech’s Kingdoms Rise series of games have been causing something of a stir since their release and now we have one more to add to the list – it’s called Scorching Clouds and it extends the tales of this fantasy world while offering players two free spin modes, the progressive jackpot and some interesting gameplay.

Kingdoms Rise: Scorching Clouds plays out on the grid shown above and the aim is to create clusters of at least four matching symbols – those will then disappear and be replaced by more falling in from above which may enable the wins to continue. The action takes place in a steampunk-inspired vehicle floating high above this fantasy land.

The high value symbols include the characters from this story – Sir Jacob Deven, Eilana Toloune and Toredd Danerick – along with the telescope, the wrench and the hammer; red, blue, green and purple gems make up the lower values. The ship’s wheel is wild and it will replace all standard symbols to help form winning combos; the special symbols are the dragon head and the glowing blue egg.

If a wild or dragon egg symbol lands in one of the three marked areas at the bottom of the reels they’ll become spreading wilds and add between two and four extra wilds anywhere on the reels.

Each time a dragon egg symbols lands on the reels it will be collected in the area at the top and when six have been obtained you’ll receive six respins; during these spins any clusters will remain on the reels while all others disappear. When there are no new wins the payout is made.

Landing three, four or five of the dragon head bonus symbols anywhere in view will award the following:

If Kingdoms Rise is the future of online slots then let’s have more of it – the features and graphics of the individual games, the linked tokens/shop and the progressive jackpots mean Scorching Clouds should be on everyone’s list to try.