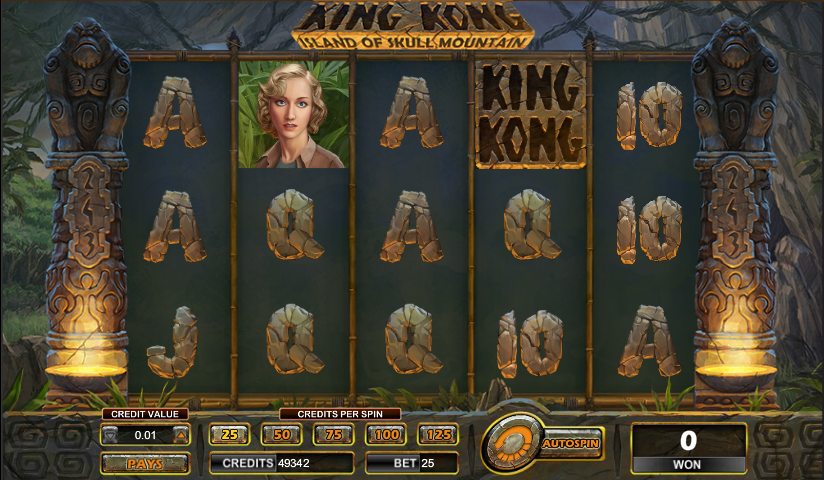 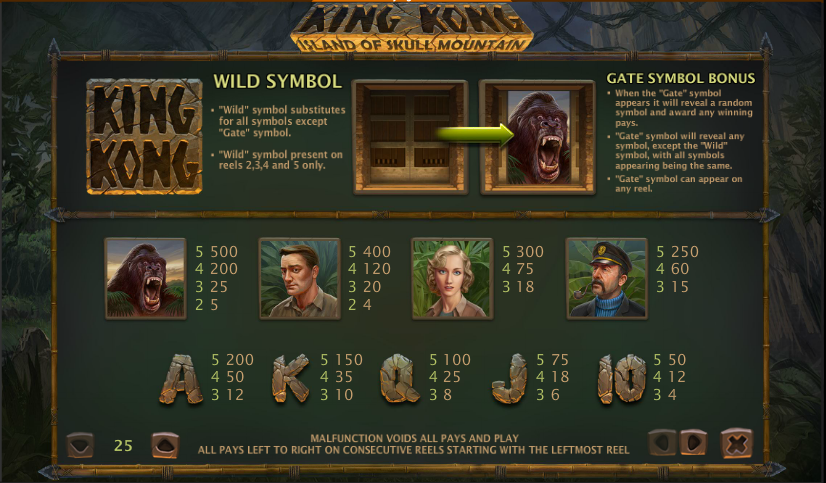 King Kong first appeared on screen in 1933 in a Merian C. Cooper film based on the character created by author Edgar Wallace. Since that first step onto the silver screen, King Kong has appeared twice more and his story of a giant ape removed from his natural habitat and brought to entertain the masses in New York is very well known.

This online slot from Amaya Gaming is called King Kong: Island of Skull Mountain – Skull Island being the name of the island from which he was kidnapped and although it lacks a little in the bonus feature department is still worth checking out; read our full review below for more information.

King Kong is a five reel slot with three rows and 243 ways to win; there is no payline structure and to form a winning combo all you need to do is land matching symbols in adjacent columns starting from the left hand side. The reels are kept in check by two carved pillars at the base of which flames are burning; tree, mountains and undergrowth form the background.

King Kong and three other characters – Ann Darrow, Captain Englehorn and Carl Denham – represent the high value symbols while 10, J, Q, K and A make up the lower values.

The King Kong logo is wild  and appears only on reels two, three four and five; the giant gate is the scatter which activates the sole feature.

King Kong gives us just one bonus extra and this is it – every time the gate symbol appears anywhere on the reels it will transform into any of the other icons except the wild. Any new wins are then paid out.

The gate will usually appear stacked and this obviously means that there’s the potential for some big wins if lots of matching symbols are revealed.

Once you get used to the fact that the gate bonus is the only extra feature this is quite an entertaining slot and it looks and sounds decent enough. However you may also like to try King Kong & Kong: 8th Wonder Of The World for some similar alternatives.