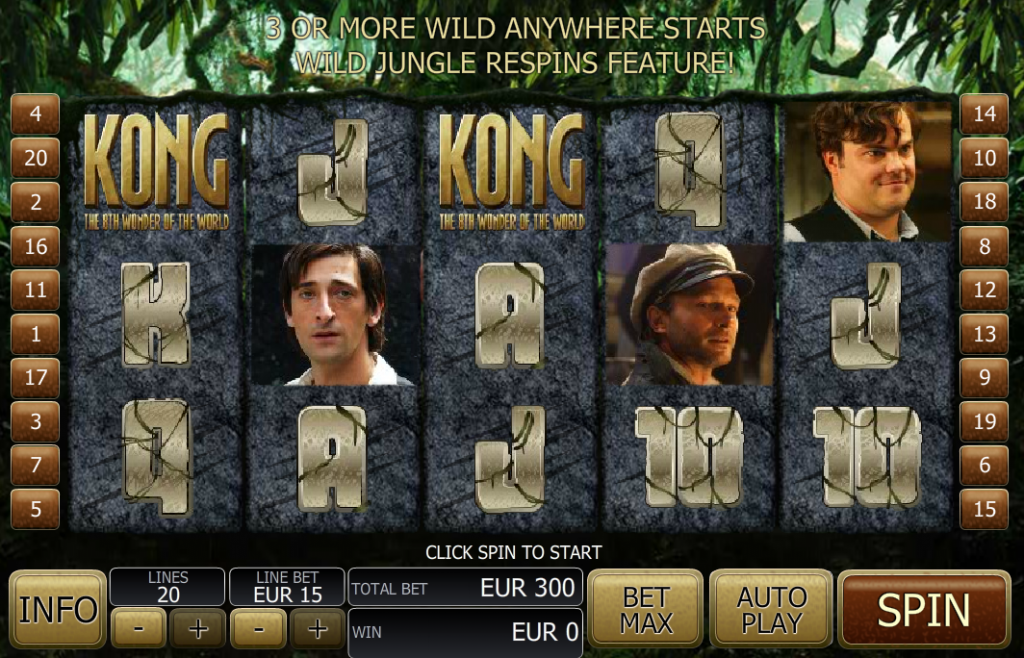 The story of King Kong is an enthralling one and more than once has the silver screen played host to a cinematic version.  It is of course the tale of a gigantic ape who is taken from his native island home to become an exhibit in New York and everyone will be familiar with the final scenes of the film featuring King Kong swatting at aeroplanes as he clings to the top of a skyscraper while holding Ann Darrow in a gigantic hand.

Kong: The 8th Wonder Of The World is Playtech‘s great tribute to the story and in particular the 2005 Peter Jackson film which featured a whole host of famous actors and actresses.  This slot is a five reel, twenty payline machine and it’s cleverly designed to emulate the jungle atmosphere of King Kong’s island home and also 1930s New York City.

The background is uninterrupted greenery and the sounds are straight from the film, meaning King Kong comes across as fast and frenetic; if you prefer a more laid back slots experience just click that ‘mute’ button in the bottom right hand corner.

The standard symbols are 10, J, Q, K and A and the special symbols are the characters Carl Denham, Jack Driscoll, Ann Darrow and Captain Englehorn.  The wild card is King Kong himself and the scatter symbol is the Kong logo.

Kong is played in two modes – Jungle Mode and Big City Mode; the default is Jungle mode but after a scatter win it will switch to Big City Mode and vice versa.

There’s a real emphasis towards bonus features here and the first one is the Wild Jungle Respins which is triggered by landing three or more wild symbols while in Jungle Mode.  You will be awarded free spins and every time you land a wild it will freeze for the remainder of the round.

Thee or more scatter symbols will trigger the Skull Island bonus and you will be transported to an overview of the island on which are a number of spots from which to choose.  Keep picking until you match three of the same creatures for a cash prize or just one King Kong for the big payout.

Three wilds will earn you the Wild Kong Respins but they’re a little different here; you get three spins and on spin one reels 1 and 5 will all be wild; on spin two reels 2 and 4 will be wild and on the final spin  all symbols on reels 1, 3 and 5 are wild.

Landing three scatter symbols will earn you the the City Tower Bonus and this is a fun game where King Kong is perched on the top of the Empire State Building and is faced with three planes heading towards him.  Destroy each in turn to win a cash prize.

Kong: The 8th Wonder Of The World is a fast-moving slot with loads of extra features which should keep you coming back for more; the two game modes are the icing on the virtual cake.  The minimum bet is just €0.01 for one payline while high rollers will like the maximum possible spin stake of €300.