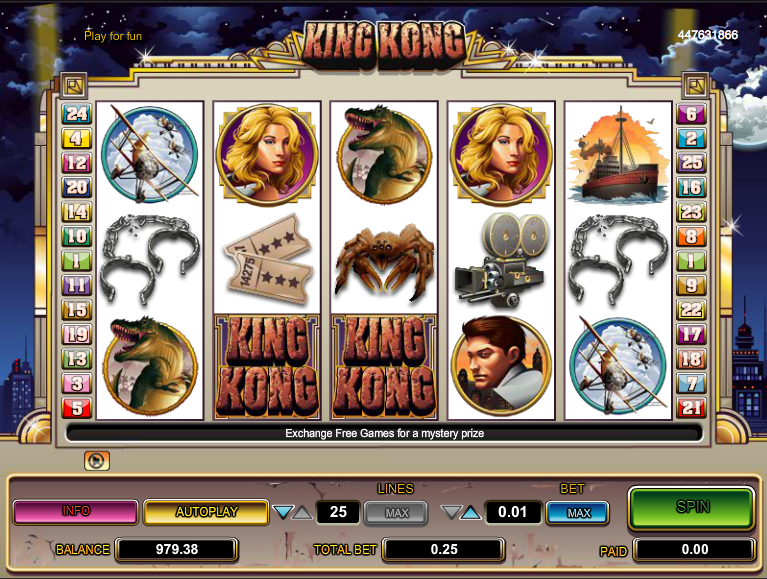 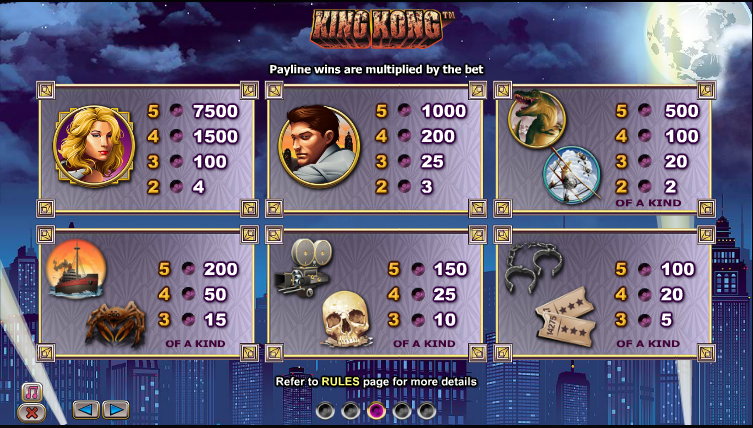 As we all know, King Kong is one of the most iconic screen monsters of all time – the giant gorilla brought back to New York from Skull Island and them paraded on stage for in front of an amazed audience. The King Kong online slot from NextGen Gaming uses this dramatic theme and provides us with a great-looking game complete with two separate bonus features.

King Kong is a five reel and twenty five payline slot and those reels are designed in a art deco fashion reminiscent of the era in which the story takes place. The background is a partly cloudy, partly starry night sky intersected by yellow spotlights.

All the symbols are theme-related and so we have theatre tickets, giant gorilla handcuffs, a skull, a television camera, a giant spider, the explorer’s ship, a biplane, a dinosaur and our male and female leads.

The King Kong logo is the valuable scatter symbol and the gorilla is the wild which also activates one of the bonus features.

King Kong the gorilla only appears on reels two, three and four  but to trigger this feature you’ll only need to land him on reel three. All positions on the centre reel are now taken up by an expanded wild gorilla trying to fight his way out of the screen. While everything is shaking, other single wilds appear on reels two and four and then the payouts for that spin are recalculated.

Three scatter symbols anywhere on the reels will trigger this bonus and initially you have to play a mini-game in which you swipe at passing biplanes; once you’ve missed three times, the number you’ve hit will be converted into free spins (maximum of 150).

Just before the free spins begin you’ll get the option to swap the spins for a mystery cash prize; take it if you wish or continue to the spins round in which all your wins will be doubled.

When you trigger the feature, we recommend always taking the spins; maybe you’ll win more, maybe you won’t but it’s more fun than just taking the prize.

NextGen Gaming are capable of producing some great games and this is certainly one of them; the graphics are great, the soundtrack is dramatic and both bonus features offer something a little different. Try it!