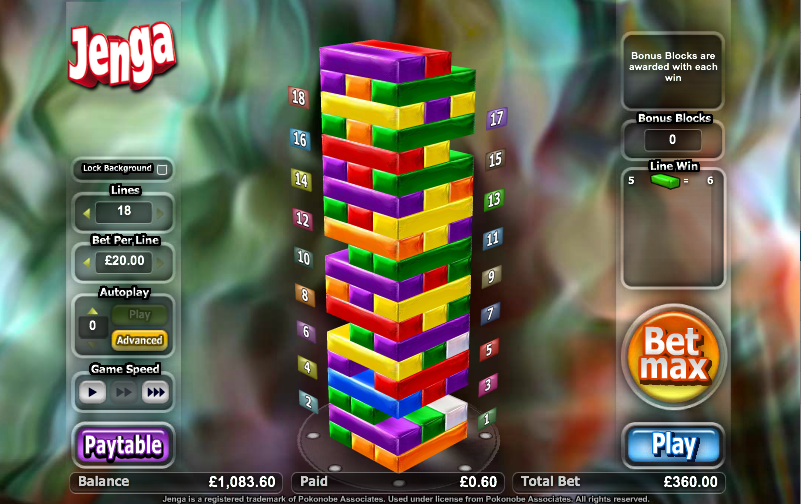 Hands up anyone who hasn’t heard of Jenga – it’s the after dinner game which involves removing rectangular blocks from a pre-constructed tower.  The loser is the one who topples the tower by removing the wrong block.  Jenga also became briefly popular as a pub pastime but here, rather than an 18 inch high stack, the tower would be about a meter and a half tall.

The task of transferring this very physical pastime to the online slots screen has fallen to Cryptologic, a company perhaps better known for their range of Marvel slots and accompanying progressive jackpots.  We’ll say from the off that Cryptologic have done a good job here – this is a smooth, fast-moving game with plenty of colour and some interesting bonus features.

When you first load up the game you’ll see the multi-coloured Jenga block in the middle of the screen; the paylines are numbered from the bottom up and there are eighteen in total but you can choose to play just nine if you wish.

The various game options are to the left of the screen – number of lines, game speed, autoplays – and there’s also an option to lock the background which changes as you play the game.  On the right of the screen is a record of the wins from your most recent game.

When you press the ‘Play’ button a new tower will drop onto the screen and the game will then evaluate that tower for wins.  You will win if a complete line is of a matching colour and there’s an extra win if another block of the same colour is linked to that line.

A block from each winning combination will now disappear and a matching number will drop on to the top of the tower, offering the chance for more matches.  If the tower topples because so many blocks have been removed, you’ll win a free game.

There are two different types of bonus blocks which can randomly land each time you play and they are as follows:

Magic Block – this will change the colour of some surrounding blocks so they all match, obviously making a win more likely for you.

Layer Bombs – these come in red, yellow and green and will destroy 2x, 4x and 8x layers of blocks respectively.  Those layers will then be replaced.

Cryptologic does these games very well (check out Cubis and Bejeweled 2), they tend to be addictive and enjoyable to play and you want to keep pressing ‘play’ one more time.  Jenga is just as good – why not just click autoplay and watch as the blocks fall into place time and again.