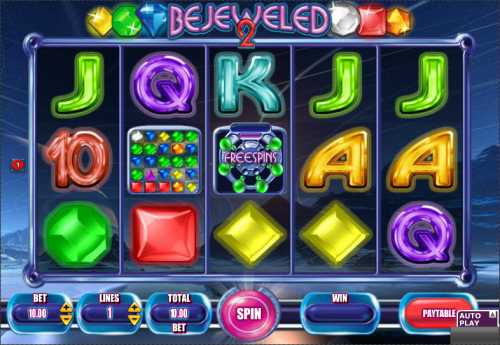 The video game version of Bejeweled 2 will be familiar to a anyone who enjoys wiling away those hours on a smartphone or a tablet; slightly older gamers will also be familiar with the desktop computer version which preceded the more mobile versions.  Then of course there are the online slots fans who arrived a little late to the game but got their own version of Bejeweled some time ago.

This latest video game/slot conversion is from Cryptologic and it’s a fantastically colourful game with five reels and twenty paylines with several bonus features to keep gamers amused.  This version is very faithful to the video game in terms of design and sound effects and the features from the game are cleverly integrated into this slot.

10, J, Q, K and A are the lower value symbols created in a suitably Bejeweled-like manner while the higher values are represented by the coloured gems – yellow, green, blue and red.  Special symbols include an animated wild, a bonus scatter, a Free Spins scatter logo and a Wheel of Riches scatter.

This is the closest the game gets to the original version and you can trigger this bonus game by landing three or more of the bonus scatter symbols anywhere on the reels,

You will now be taken to a traditional Bejeweled board but you don’t get to play the game; there’ll be one matching set somewhere on the board which will explode, allowing more gems to fall into the gaps with the additional potential of making more matches.

When this automatic game has ended you will be awarded the total sum won as the gems are matched.  A red Powergem acts as a 2x multiplier while a Hypergem destroys all gems of one colour and awards a mystery win.

Land three, four or five of the Wheel of Riches symbols anywhere on the reels and you’ll play a very short bonus game which awards you a multiplier of your total stake for that spin.

Everyone likes some free spins and landing three, four or five of the Free Spin scatter symbols will reward you with 15, 25 or an impressive 50 freebies.  To begin this round you’ll need to play a short game to select a multiplier which will then be applied to any wins.

During this feature you can win more free spins and you can also trigger the Bejeweled Bonus game.

The original Bejeweled slot was good but this is better and it really sticks closely to the feel and sounds of the video game.  Three bonus games are the icing on the cake and we’re more than happy to recommend this slot.