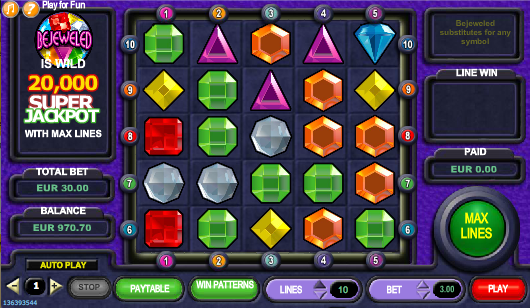 If you’ve been playing those time-wasting flash games on various free websites over the years you’ll almost certainly have come across Bejeweled in one form or another.  You may even have played the Bejeweled Blitz on Facebook or perhaps downloaded the app for iOS or Android.

If this sounds like you and if you also like to spend some time on the online slots then you’ll be pleased to hear about the Bejeweled online slots game.  Some casinos tend to file it away with the arcade-style video games but it has reels of a sort and paylines so it’s close enough to being a slot for our purposes.

To all intents and purposes it is a slot machine but one which lacks a few of the bonus features of more complex machines.  That won’t matter to Bejeweled fans though as it’s the way the gems interact which provides the attraction.  In the original game the player swaps the gems themselves to create rows of three or more; here, with each press of the ‘play’ button, gems drop from the top of the screen.

If horizontal or vertical rows of three or more gems are formed, that’s a win.  The good bit comes next though as those gems which made the combos are removed and those above fill the gaps, with new gems appearing from the top.  This means that you can continue to make winning combinations on the same play as fresh gems appear from the top of the screen.

Different gems are worth different amounts and from lowest value to highest value they are purple triangles, orange hexagons, red squares, green octogons, yellow diamonds, white circles and blue jewels.  There’s also a Bejeweled symbol which is a wild card.

If you like all the other versions of Bejeweled then you’ll like this one too.  It brings all the charm of the original to the world of slots and you can win money as well.