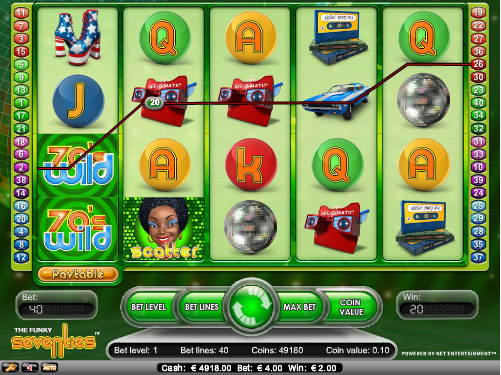 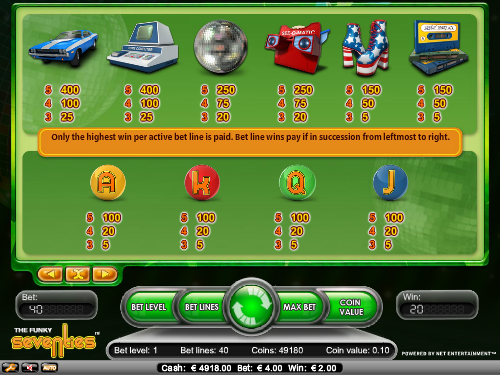 You may already have played the other games in this series from Net Entertainment but if you haven’t then check out The Groovy 60s and The Super 80s. Bearing those titles in mind you should already have an idea of the theme of the Funky 70s, Net Ent’s tribute to a decade of fantastic music, outlandish clothes and heroic amounts of drug-taking (not that we’d encourage the latter).

The Funky 70s has five reels, forty paylines and four rows for your gaming entertainment and the backdrop to the reels is a collage of 1970s items such as platform shoes and vintage cars, all underneath a sparkling glitterball.  The music is a superb twangy guitar number.

There are some great 70s symbols which include cassette tapes, platform boots, a See-O-Matic camera, a glitterball, an early computer and the white-striped car.  Bonus symbols include a 70s wild symbol and a scatter featuring a foxy, Afro-haired girl.

Not only will the wild symbol substitute for the basic symbols to make winning combinations, it also appears stacked on the reels which means that the symbols will appear on top of one another.  This has the potential to create extra winning combos.

Free spins somehow seem like an appropriate bonus for this game when you consider the music and the glitterball and the way to trigger them is to land three of the Afro girl scatter symbols anywhere on the reels.

Low rollers might like to play with less than the forty paylines – you’ll still be able to trigger the feature with scatter symbols however many lines you play.  Prizes will be proportionately less though.

Like the other two slots in the series, this is a pretty simple affair which is boosted by the attention to detail in the theme’s design.  Make sure you keep the music on for the funky 70s soundtrack.