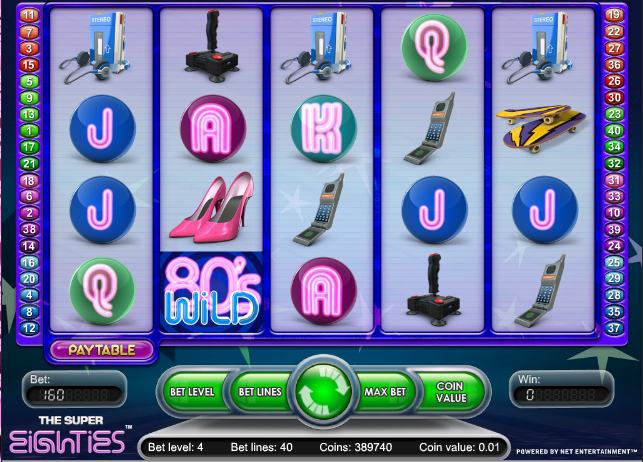 The 1980s seems to divide opinion somewhat; was it as super as The Super Eighties suggests or was it in fact a cultural wasteland of terrible clothes and music which was thankfully elbowed out of the way when the 1990s appeared on the horizon. This online slot from Net Entertainment clearly thinks it was the former and though we may argue, we’re happy to give this slot a go.

The Super Eighties has five reels and an impressive forty paylines and comes complete with a twangy electronic 80s soundtrack which you can leave on or mute as you wish.  The backdrop to the game comprises neon lights, pink stilettos and a early walkman.

Low value symbols are 1980s-style playing cards but the higher values are represented by a selection of 80s objects and so we have a skateboard, the aforementioned stilettos, a computer joystick, the walkman/headphones, a very early mobile phone and a contemporary sports car.

The special symbols are an 80s wild symbol and a scatter symbol featuring a blonde-haired girl with  a pink stripe through her barnet.

The 80s wild symbol is not just any old wild, it’s a stacked wild which means that on each reel a number of the symbols appear on top of each other.  This is a good thing because it creates the opportunity for extra winning combos featuring these stacked symbols.

The main bonus feature in The Super Eighties is the free spins round and you can activate this by landing three of the blonde girl scatter symbols on reels two, three and four.

You will now be awarded five free spins and all prizes won will be subject to a 2x multiplier; five spins may not seem that generous but you do have the opportunity to win more spins while paying this round by landing three more scatter symbols.

Well you may have guessed from the article that we didn’t really appreciate the cultural offerings of the 1980s but because this slot is worth playing you can just click the mute button and spin the reels.  Of course if you did like the 80s then turn your speakers up and have fun!