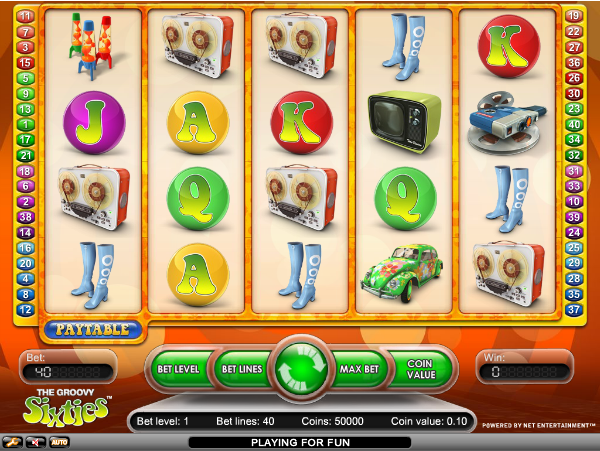 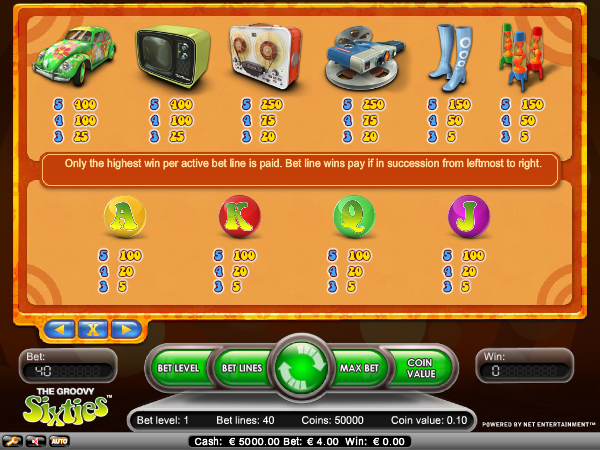 Whenever you write an article about the 1960s you are of course obliged to mention the fact that if you can remember them, you weren’t there or you were definitely not having enough fun; we can’t comment on that because we’re not quite old enough but we know the music and the fashion and so we’re quite happy to play an online slot based on that funky decade.

The Groovy Sixties is a five reel slot by Net Entertainment which features a generous forty paylines.  The game features a 60s-style soundtrack which is a pleasure to listen to even if it is a bit Austin Powers-ish.

The low value symbols are represented by J, Q, K and A but these letters are rendered in a psychedelic, typically 60s way.  Higher value symbols include lava lamps, a pair of (possibly kinky) boots, a film projector, a reel to reel sound system, a tiny television and of course a VW Beetle.

The game’s special symbols include a 1960s wild and a scatter symbol featuring brown-haired young lady.

All the reels feature stacked wilds which means that the wild symbols are set on top of each other; this tends to mean that they form more winning combinations than a single wild would do.  The more reels on which you can land stacked wilds the better for your pocket.

Free spins are always popular and The Groovy Sixties offers this bonus feature for our enjoyment; you’ll need to land three of the scatter symbols anywhere on reels two, three and four and for that you’ll get five free spins.

Five spins may not sound that generous but it’s possible to win more within this feature by spinning more scatter symbols.  Additionally all wins during this phase are subject to a 2x multiplier.

This is a relatively standard game from Net Entertainment but the groovy music and 1960s- style graphics add a touch of class to proceedings.  From our experience the free spins feature tends to get triggered fairly regularly.