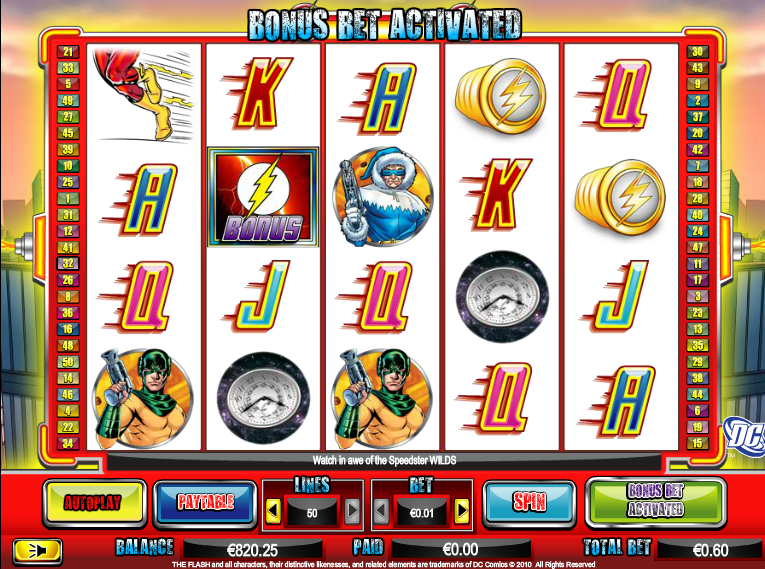 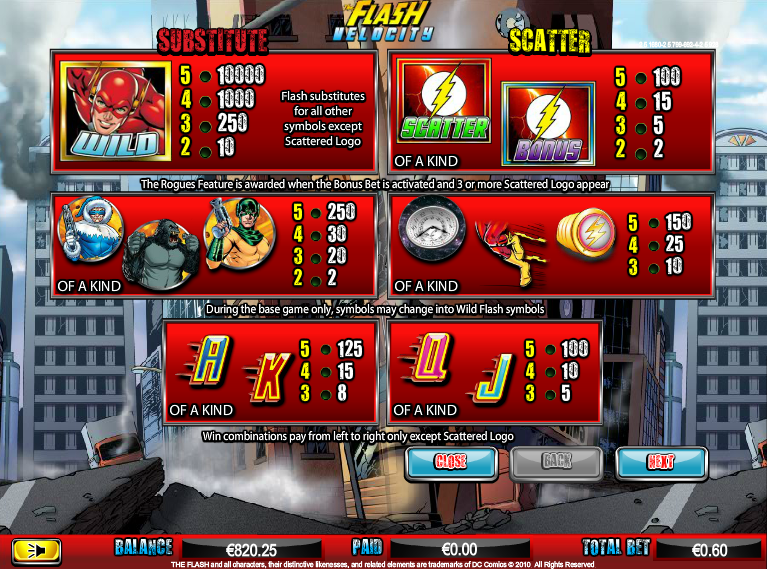 The Flash is a DC Comics superhero with the ability to move at extraordinary speeds; in the DC universe several characters have developed into The Flash with the most well-known being Barry Allen. The Flash Velocity is an online slot from Cryptologic (now swallowed by Amaya Gaming) which uses this character as it’s theme and it joins Batman and Wonder Woman in this genre.

The Flash Velocity is five reel slot with four rows and up to fifty paylines; it’s a little basic-looking but it comes complete with several bonus features to enliven proceedings. The sound effects are a mixture of dramatic noises and traditional one-armed bandit sounds.

There are are six high value symbols including the Flash icon, a pair of fast-moving legs, a speedometer, Mirror Master, Gorilla Grodd and Captain Cold. Lower values are the standard J, Q. K and A.

The Flash himself is wild and the big Flash logo is the scatter symbols which activates the main feature. The feature can only be triggered of you have activated the bonus bet in the bottom right hand corner; you must be playing all fifty paylines to do this and it will cost you an extra 10 credits.

If you’ve activated the bonus bet then landing three or more of the Flash scatter symbols anywhere in view will trigger 12 free spins. You can pick one of three additional extras as follows:

If The Flash wild helps you form a winning combo there’s a possibility of a multiplier up to 10x.

On any base game spin The Flash may zoom across the screen, turning a random number of symbols wild as he goes. The reels will be reevaluated after this for any wins.

We’d always recommend spending that little extra and activating the bonus bet because it’s the only way to trigger the free spins. Also it makes the game more exciting.

It might be a bit basic but The Flash is certainly action-packed and the Speedster Wilds happen a lot. The free spins are a little tougher to trigger but worth it when you get there.