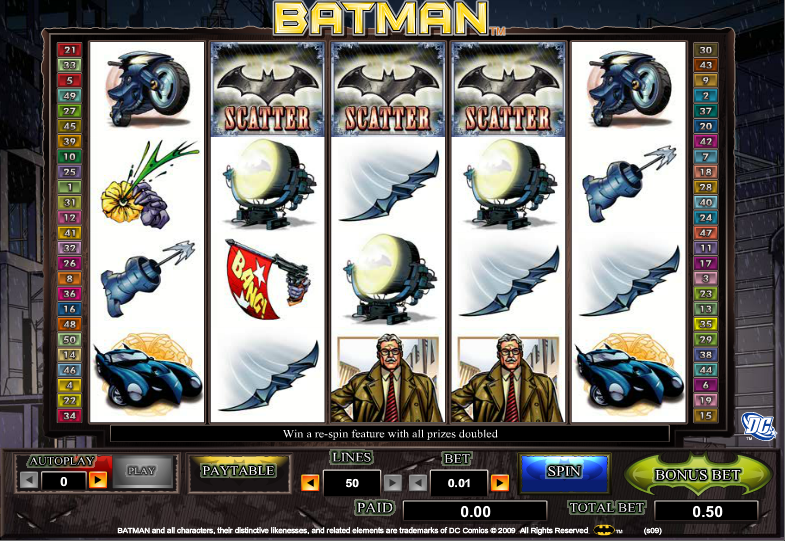 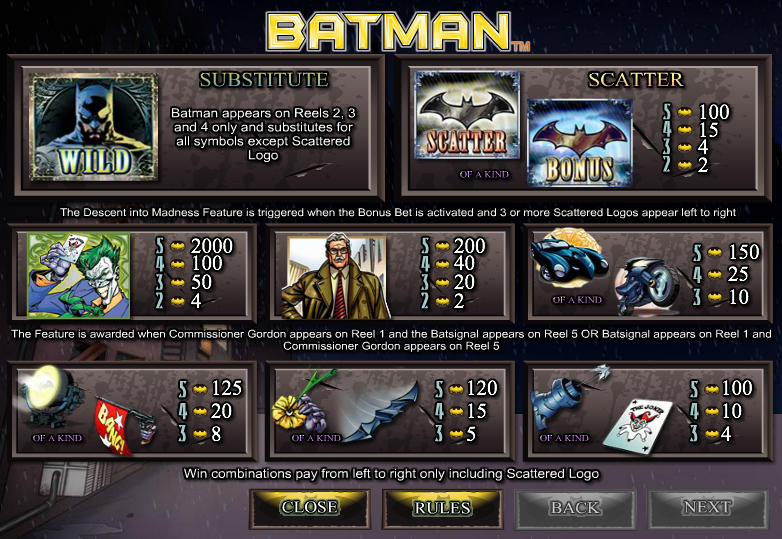 One of DC Comics most famous characters is of course Batman, the caped alter ego of billionaire Bruce Wayne.  There are very few characters who will make a better subject for an online slot machine and Cryptologic/NextGen have turned their attention to Gotham City’s finest with this Batman slot machine.  For an alternative Batman slot, check out Microgaming’s The Dark Knight Rises.

Cryptologic’s version is a really atmospheric slot which features five reels, four rows of symbols and fifty paylines; the backdrop is of a dark rainy night in Gotham City. The main characters are Batman, Commissioner Gordon and the Joker and the other symbols include their various accessories such as a playing card, novelty flower, the Batsignal and our hero’s most useful gadgets.

Batman himself is the wild symbol and there are blue and yellow Batsignal logos which trigger the two bonus features.

This is something we see occasionally when playing slots and it means that the Descent Into Madness feature only becomes available when playing maximum paylines plus ten extra units.  If you don’t want to pay that extra then only the Batman Re-Spins feature will be available and you’ll also miss out on an extra wild symbol on reels two, three or four.

Trigger this feature by landing Commissioner Gordon on reel one and the Batsignal on reel five or vice versa.  One of reels two, three and four will then become a frozen wild while the remaining reels will be re-spun three times, hopefully resulting in decent payout.

Remember you need to playing with the Bonus bet to be able to trigger this game; three or more of the yellow scatter symbols will activate it and you’ll then play a game where Batman has to defeat a load of asylum inmates before trying to capture the Joker.

You’ll get two chances to defeat your nemesis and there’s a prize of up 100x your bet available if you manage it.

We’d always recommend playing the Bonus Bet option; the bet is of course higher but an extra feature is available along with an extra wild to help you along.

Superhero-themed slots do not always come up with the goods but this is an impressive game which offers plenty of variety and a great playing environment.  For those who like superhero slots, this is one not to miss.