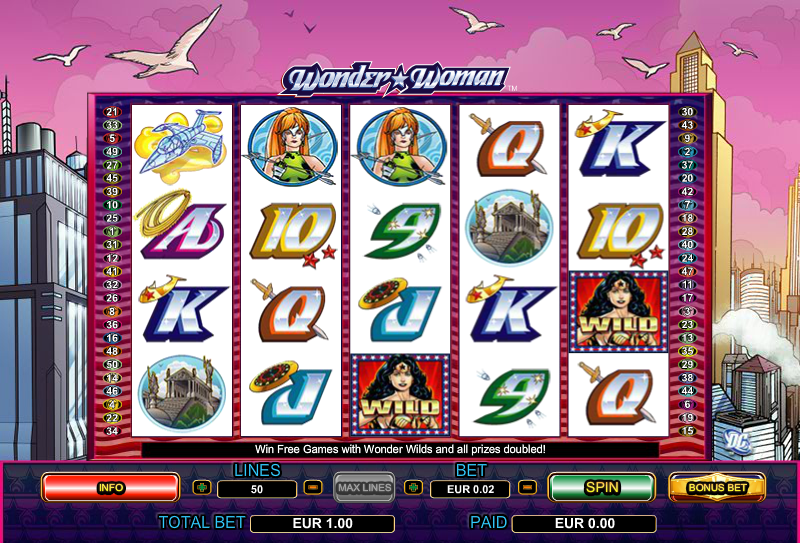 Online slots fans looking to add to the set of superhero-themed slots they’ve played should take note of Wonder Woman from Cryptologic.  Wonder Woman was first published way back in 1942 and is one of the longest-established DC Comics superheroes but came to wider attention in the 1970s with the popular television series – a Wonder Woman-themed slot machine is certainly welcome.

This is an all-singing, all-dancing slot with five reels, four rows and fifty paylines; the backdrop to the reels is a montage of red, white and blue and there’s some suitably dramatic music to accompany your gameplay.

Aside from the low value playing card symbols we have Wonder Woman’s vehicle, a Greek temple (the original comics used that theme), a green-garbed female and Ares the baddie. There are also Wonder Woman scatter and bonus symbols and a Wonder Woman wild.

This will cost you 10 extra coins and you can select to play it when using all 50 paylines; scatter prizes are increased and the Ares Showdown bonus game becomes available.

To trigger the free spins you’ll need to land three or more of the Wonder Woman bonus symbols anywhere on the reels.  You will receive 8 free spins and during this feature Wonder Woman will kindly add random wilds to the reels.  These wilds will remain in place for up to five spins and the extra good news is that all wins during this feature are doubled.

AS we mentioned above, this feature is only available if you’ve activated the Bonus Bet and then it’s triggered by landing three of the Wonder Woman scatter symbols anywhere on the reels.

We say go for the Bonus Bet and play for the chance of winning the Ares Showdown.  What’s the point of playing a fully-featured slot if you’re only going to use half the facilities?

Although Wonder Woman is a little dated it’s still fun to play and playing with the Bonus Bet means you’ll have the potential to win all the bonus games.