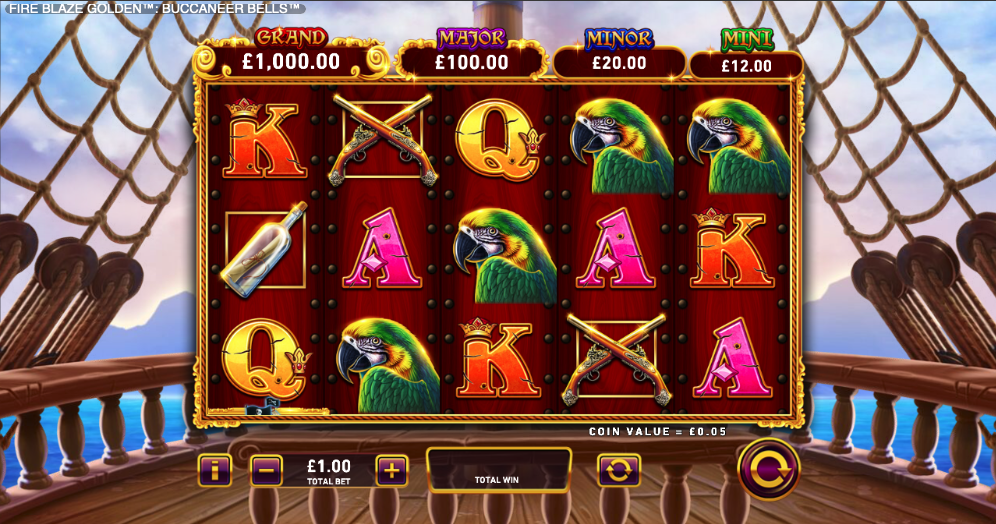 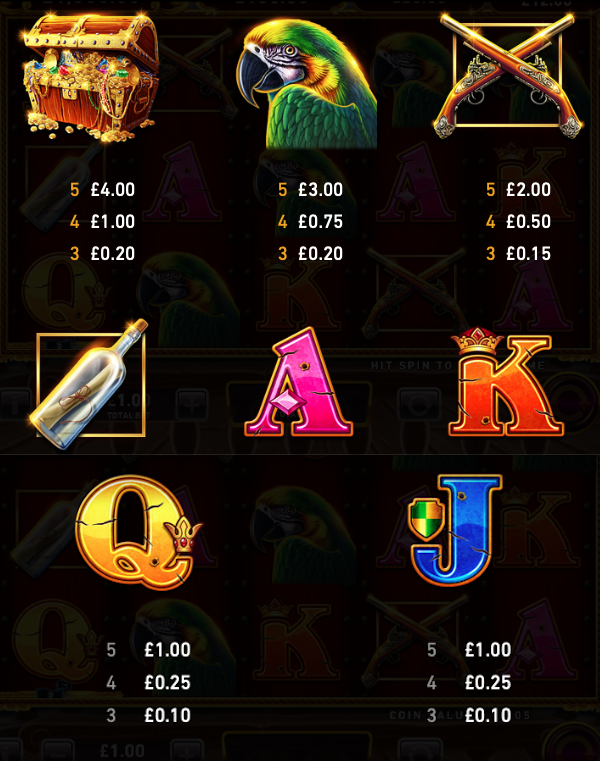 Shot me hearties! It’s time to hoist the cabin boy and roger the main sail as we try out this pirate-themed online slot from Playtech/Rarestone Gaming; it’s called Buccaneer Bells and as well as offering free spins it’s part of the Fire Blaze series of games with their four jackpot prizes.

Fire Blaze Golden: Buccaneer Bells is a five reel slot with three rows and forty fixed paylines; those ornate, golden reels float above the deck of this particular pirate vessel, anchored off the coast of a sunny, Caribbean island.

Piratey symbols include the treasure chest, the parrot, the crossed pistols and the message in the bottle; J, Q, K and A represent the lower values. The pirate captain is wild while the special symbols are the pirate ship and the golden bell.

This is triggered by landing at least six of the golden bell symbols anywhere in view and the initial award is three respins with each bell transforming into a coin and locking in place; each extra bell which lands will also lock and reset the spins to three again.

When the round ends you’ll receive the prize values shown on the coins unless all positions are filled with coins in which case the Grand Prize of 1000x the stake is awarded. Coins may also display the other jackpot prizes.

Landing at least three of the pirate ship scatter symbols anywhere in view will award eight free spins initially but once the spins are underway two or three scatters will add an extra four or eight spins.

The Golden Respins can also be triggered from within the free spins feature.

Buccaneer Bells is really a copy of other Fire Blaze slots but if you prefer the pirate theme over, for example, the theme of Amazing Factory then it’s all good; a higher than average RTP of 96.48% seals the deal.

Yes! The free spins round and the Fire Blaze jackpot feature.

The Return To Player percentage for Buccaneer Bells is 96.48%.

How To Win On Buccaneer Bells?

Land at least three matching symbols or wilds on an active payline starting from the left hand side; trigger the free spins or Fire Blaze Respins.

Where can I play Buccaneer Bells then?