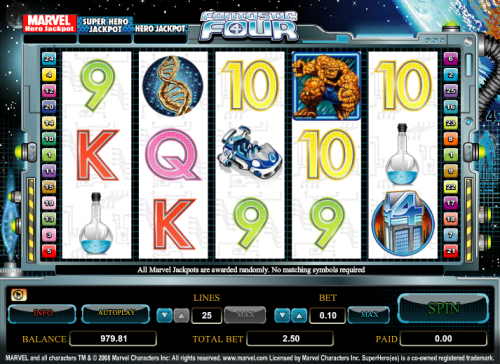 There are plenty of superhero slot machines around but there’s always room for one more, especially if it’s a Marvel slot from Cryptologic which of course features their Marvel progressive jackpot.  This one is based on the Marvel comic and film, Fantastic Four, which relates the story of four scientists exposed to gamma rays in space and given interesting superhuman powers.  You can read about Playtech‘s more recent version of this slot here.

This five reel and twenty five payline slot is set in outer space and aside from the standard playing cards to represent the low value symbols we also have some theme-related symbols as the higher value ones. From low to high value we have a beaker, a craft, the F4 headquarters and a DNA helix.  The scatter symbol is the F4 logo and each reel has it’s own wild card – one character for each reel:

Three or more scatter symbols landed anywhere on the reels will trigger this bonus feature and as you can see from the video below you will be given the choice of five different games as follows:

As with all Cryptologic Marvel slots all players will be eligible to play the Marvel Jackpot; it’s awarded randomly but you’ll have a better chance if your stakes are higher.  If you do get lucky you’ll have the chance to win the Hero Jackpot, the Superhero Jackpot or the Marvel Hero Jackpot.

Fantastic Four maintains the standards set out in Cryptologic’s other Marvel slots and it’s an enjoyable enough diversion with the multiple bonus games adding an extra something.