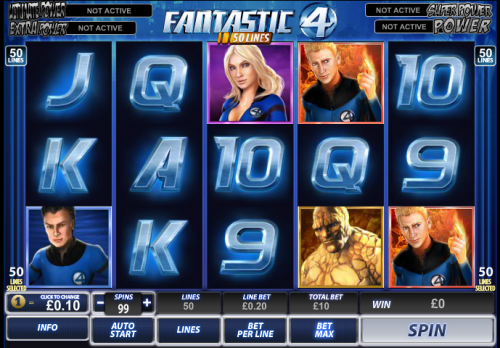 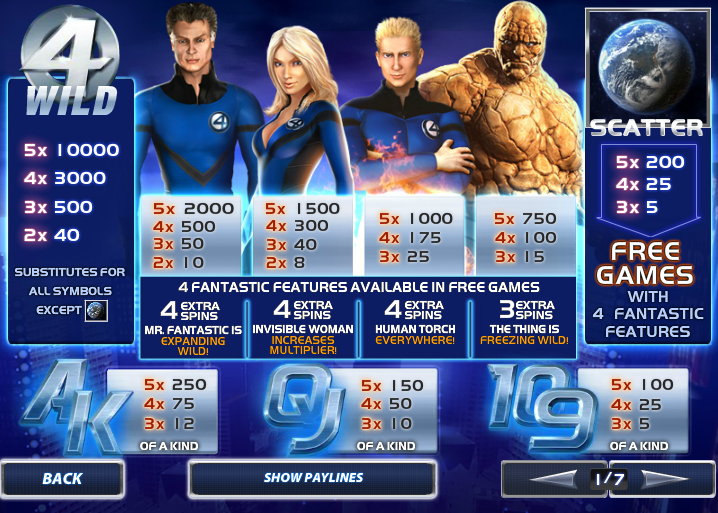 Our latest online slot review is another superhero themed offering from Playtech and if you’ve already guessed it’s a Marvel slot then you are correct.  Playtech and Marvel together create some of the most compelling slots around and the progressive jackpot which links them all together is the icing on the cake.

Fantastic Four is of course based on the Marvel comic of the same name; four scientists who were exposed to gamma rays during a space mission acquire special powers.  There is Mister Fantastic who can stretch his limbs, the Invisible Woman, the Human Torch and the Thing who is made of stone and gains immense strength.

The five reel, fifty payline slot brings these characters to life pretty well and the game has a futuristic feel to it which is complemented by the classy graphics.  The lower value symbols are Playtech’s standard 9. 10, J, Q, K and A but the higher value symbols are the superheroes themselves.  In ascending order of value they are the Thing, Human Torch, Invisible Woman and Mister Fantastic.  The scatter symbols is the earth and the wild symbol is the Fantastic Four logo.

You can trigger the bonus game by landing three or more of the scatter symbols anywhere on the reels and you instantly win yourself 12 re-spins.  What makes this feature a bit more lucrative is the appearance of extra character symbols on the third reel; when one character covers the whole reel you will be rewarded with four extra spins (three for the Thing) and the following:

It was a pretty lucrative bonus round for us and the anticipation of spinning an expanding wild on the middle reel makes it more exciting.

As it’s a Marvel slot it of course features the Marvel progressive jackpot and just playing the game makes you eligible for the Power Jackpot, Superpower Jackpot, Extra Power and Ultimate Power.  This occurs randomly whatever your wager.

Playtech’s version is certainly better then Cryptologic’s older release so we’d recommend checking this one out. There are plenty of bonus features, the progressive jackpot but a slightly low RTP of 91.99%