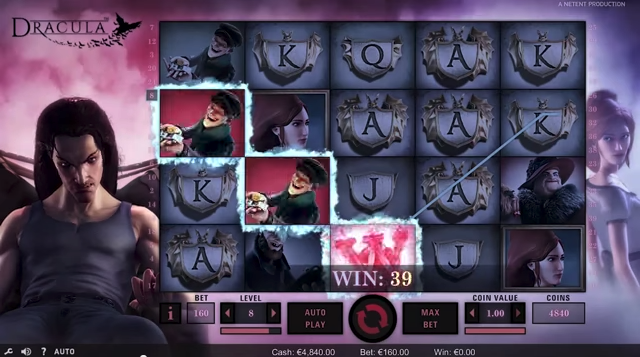 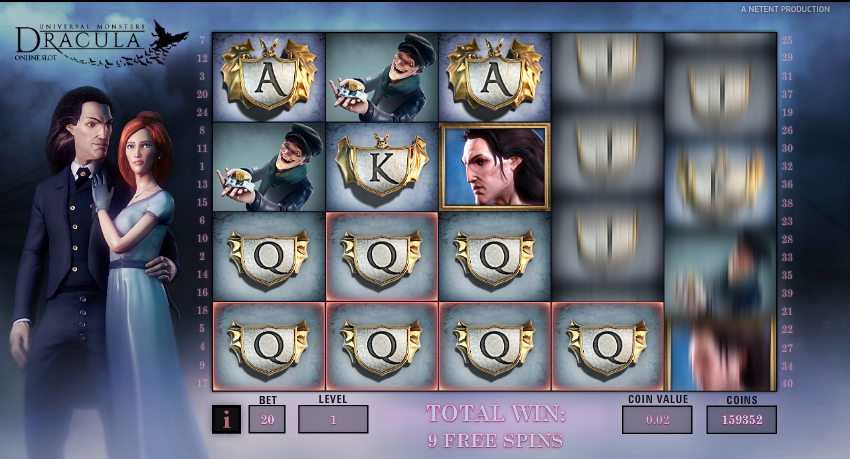 As soon as you load up this brand new online slot from Net Entertainment you know it’s going to be good; a girl is chased through medieval streets by an unseen enemy and that’s where the scares begin. This is of course Dracula, a game based on Bram Stoker’s 1897 novel about the eponymous vampire and it joins games such as Aliens and The Invisible Man based on pre-existing stories.

Dracula is a five reel slot with four rows and forty fixed paylines; it sounds fantastic and looks even better and you will be instantly struck by the appearance of the Count himself to the left of the reels. He bursts creepily into life whenever you land a winning combo.

The wild symbol is a big, blood-red ‘W’ which only appears on reels two, three and four; Dracula and the Lady appear stacked on reels two and four respectively and activate the main feature.

Randomly in the base game you will see Dracula transform into a swarm of bats; they will fly onto the reels and turn a group of icons into matching symbols. The reels will then be reevaluated for any wins.

This feature is triggered by landing the complete stacked symbols of Dracula and the Lady on reels two and four respectively.

You will now receive ten free spins after watching a cut scene of shenanigans involving both characters; an extra symbol appears on reel three which includes both Dracula and the Lady and if you can land it here you’ll get two extra spins.

The Bat Feature is also active here but on every spin so you can expect the occasional big win here.

Dracula is just a superbly put together slot and if this is the future of gaming then we should all be happy. It exceeds Net Ent’s already high standards and we recommend it very highly. There’s an RTP of 96.60%.