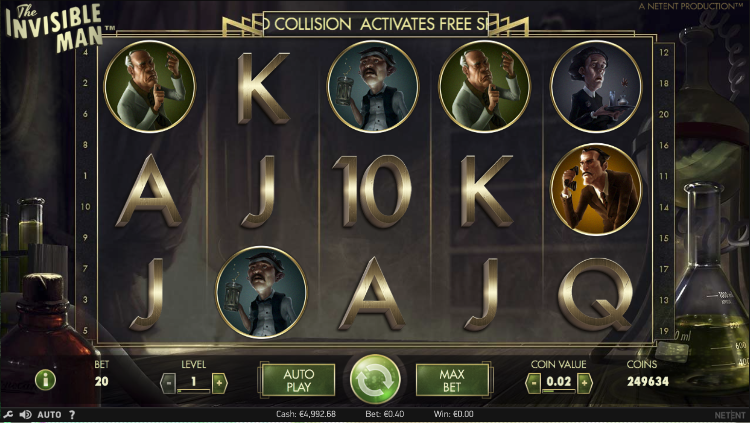 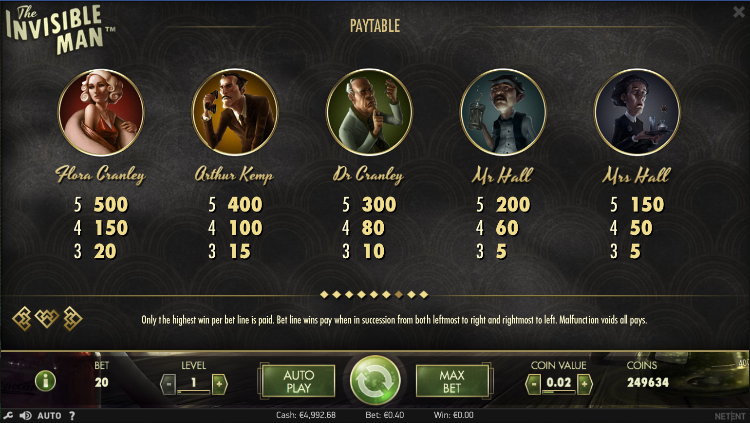 The Invisible Man has finally made it into our recommended casinos; it’s an online slot based on the H. G. Wells novel of the same name from 1897. This is a Net Entertainment development and it’s absolutely packed with well-designed bonus features, some top quality graphics and a dramatic soundtrack. It’s all explained in more detail below.

The Invisible Man is a five reel slot with three rows and twenty paylines; those reels spin inside an industrial art deco frame behind which are the ephemera of a laboratory – test tubes, flask, beakers and the like.

Five characters from the book are the five high value symbols – Flora Cranley, Arthur Kemp, Dr. Cranley, Mr Hall and Mrs Hall. 10, J, Q, K and A are the lower values. Winning combos can be formed from right to left as well as left to right.

In the base game, a policeman wild appearing on reel one or an Invisible Man wild on reel five will move across those reels one by one, collecting payouts on the way. Each respin is free until they drop off the side of the screen.

If a policeman and Invisible Man wild merger on the reels you will awarded ten free spins; more wilds appear during this feature and if they merge again, another four spins will be added to the total.

You will also notice that there are two meters above the reels with eight spaces; every time a wild drops off the side a space is filled up. If you manage to fill one of these meters before the spins end, another bonus game corresponding to that character begins when the spins end:

The Invisible Man is an example of what a excellent online slot should be – fantastic graphics, a compelling theme and lots of easily activated bonus features. The intro movie should be checked out the first time you play and this is a game we can highly recommend.