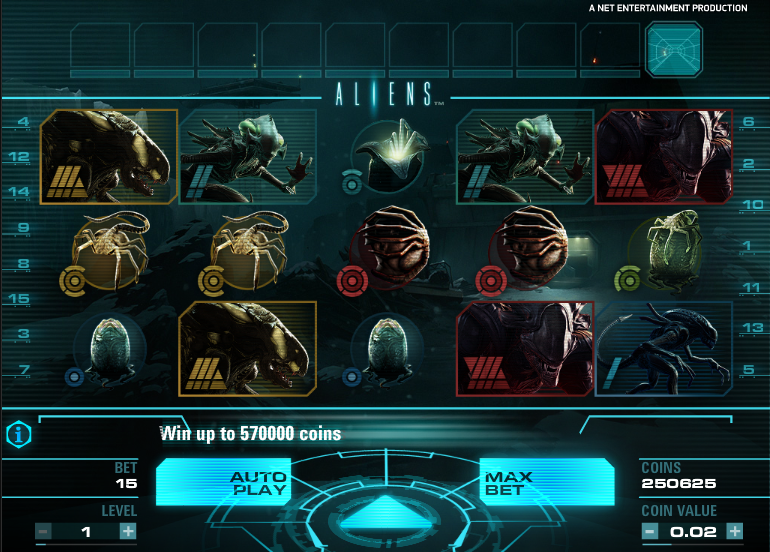 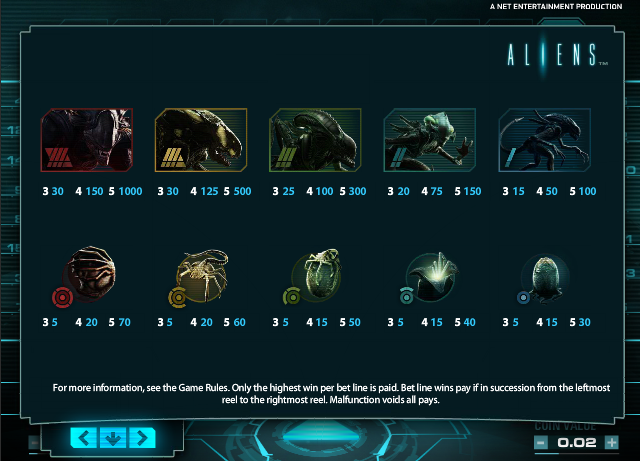 Hearing about a new release from Net Entertainment always creates a ripple of anticipation which you just don’t get from many other developers. We may be overstating that a bit but Net Ent’s new Aliens online slot certainly looks like the business and it features Net Ent’s first use of real time 3D graphics.

There’s loads to say about this game but the basics are that this is a five reel and fifteen fixed payline slot. The gameplay is a combination of a traditional slot and lots of real time animation which kicks in when you trigger the bonus feature. There’s a dark and brooding atmosphere reminiscent of the first two films but the action is well truly taken from the second film – Aliens. The music is tense and well-composed.

The symbols are a scary selection of alien eggs and monsters which will be immediately recognisable from the movies; the lowest value is an unhatched egg and the most valuable is a fully grown monster looking directly at you. The only special symbol is the Weyland-Yutani wild.

There’s a three part arcade game-style adventure to contend with in the feature but first you’ll have to trigger it and you do this by filling up the multiplier meter above the reels. Each win will fill up the meter by as many symbols as were in the winning combo but not including wilds.

Now you get to play a marine heading through a darkened corridor and shooting aliens. Each spin will reward you with a guaranteed win corresponding to the steps along the multiplier meter. After each spin the marine will shoot some aliens but your problem is ammo. Ideally you need to collect ammo from the dead marines lying on the floor but this doesn’t always happen. If you run out before you reach the end of the multiplier that’s game over.

Make it to the end and you’ll reach the hive.

Here you will find two horizontal reels, one grenade strength reel and one grenade multiplier. You will get five spins here and with each spin a grenade will be hurled at the Hive. The greater the combination of grenade strength and multiplier, the more damage you will do to the Hive. At the same time you fire a gun which has four ammo clips – when you’re out of ammo that’s game over.

The idea of course is to destroy the Hive with the grenades before you run out of ammo.

There’s so much going on here that one would imagine there’d be some interactivity but actually there is none. All we would say is to get the best out of the game, turn the lights off and keep the sound effects on.

This is certainly different and it may not be for everyone but we think it’s fantastic; the animation is better than anything we’ve seen before and it’s certainly the most immersive combination of online slot and arcade gaming we’ve seen, even if there’s no interactivity. Check it out!