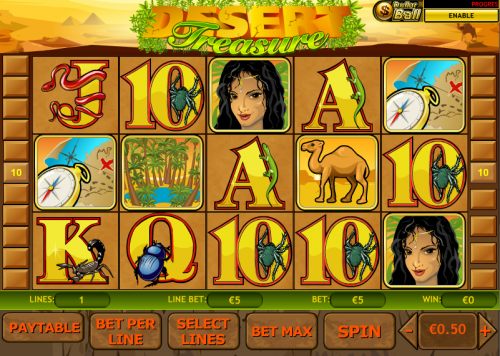 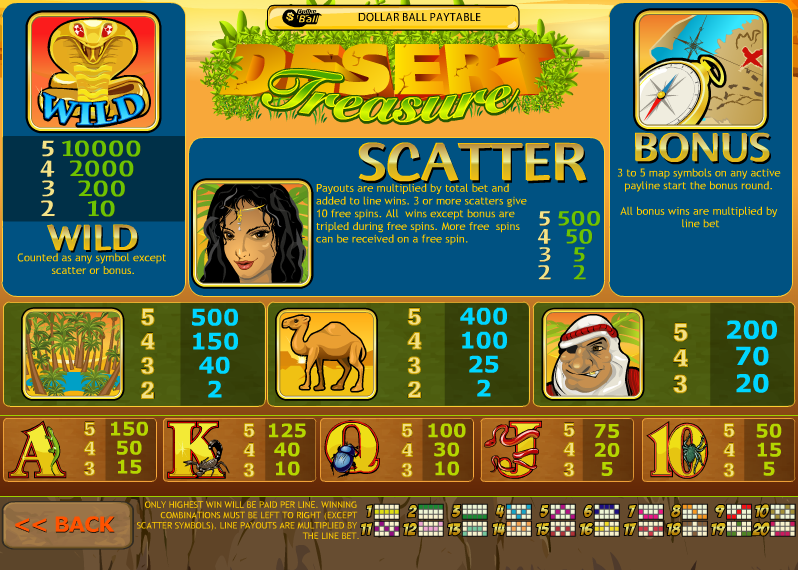 Those slots fans familiar with Desert Treasure II could do worse than to check out the original Desert Treasure to see where it all began and to find out why it remains an enduringly popular game.  It’s perhaps like watching the sequel to The Godfather and then deciding to watch part one just to catch up on the story so far.  There’s not so much narrative continuity in Desert Treasure but you get the point.

Anyway, Desert Treasure  is an online slot with five reel and twenty paylines and it’s a Playtech release; it’s set amongst the sand, the pyramids and the oases of Egypt and above the reels you can see a desert vista stretching into the sunny distance.

10, J, Q, K and A are the lower value symbols adorned with various desert creepy crawlies but higher up the scale there’s a bunch of desert related items and so we have a swarthy gentleman with an eyepatch, a camel and an oasis.

Special symbols are a golden cobra wild, a dark-haired princess scatter and a bonus symbol containing a compass and a map on which X marks the spot.

Landing three, four or five of the map/compass symbols on an active payline will kick off the mini-game; you’ll now get taken to a screen where the swarthy chap lets you pick three, four or five (depending on how many bonus symbols you landed) chests, each containing a cash amount.  Check this out in the video below.

Those who appreciate a free spins round will be reassured to know that you can win ten spins by landing three or more of the princess scatter symbols anywhere on the reels.

During this phase all your wins will be tripled and as an added extra it’s possible to win more spins by landing three more scatters.

For a small extra charge you can take part in one of Playtech’s progressive jackpots and all you need to do is click the ‘Enable’ button next to the Dollar Ball logo in the top right hand corner.

Desert Treasure may be a little dated now but it’s something of a classic slot and still well worth a few minutes of your time. It’s fast moving and the Treasure Chest bonus round seems to get activated pretty regularly.