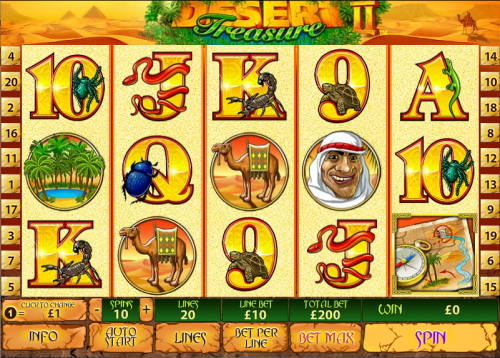 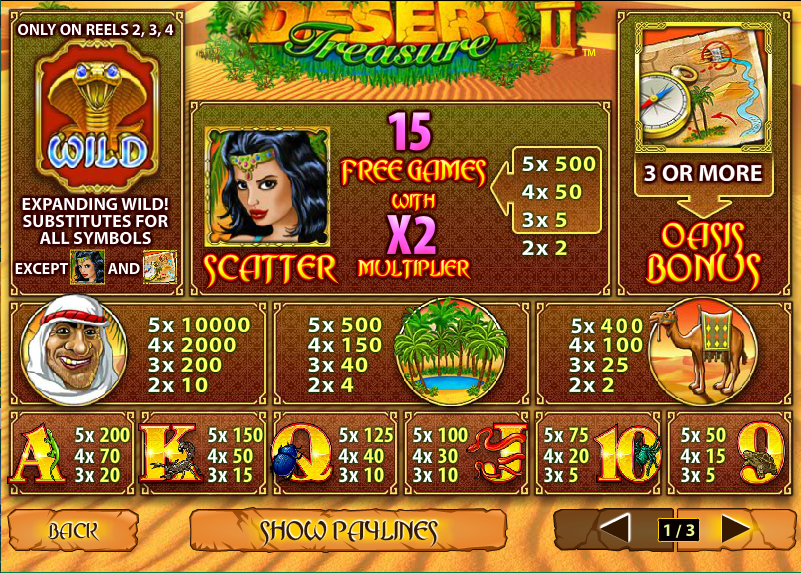 Those who remember Desert Treasure will be pleased to hear that there’s a sequel to the popular online slot machine.  Desert Treasure II is a worthy successor to it’s predecessor and it improves upon the graphics and gameplay well enough to make it a fresh diversion for online slots fans.  It also comes with a funky Arabian soundtrack.

The theme once again is of course a romantic desert setting and the backdrop to the game is a Saharan landscape with Pyramids just visible in the distance underneath a scorching orange sky.  The symbols are all nicely rendered and even the standard, lower value 9, 10, J, Q, K and A are adorned with desert creatures such as spiders, beetles, tortoises, snakes, scorpions and lizards.

The special, higher value symbols are a nomad, an oasis and a camel while the wild is a golden cobra, the scatter is a beautiful girl and the bonus symbol is a map.  The wild card is an expanding wild card which only appears on reels 2, 3 or 4 but which covers the whole reel when landed, resulting in extra winning combination possibilities.

Three or more scatter symbols will win you a cash prize plus fifteen free spins with a 2x multiplier. During his phase more free spins can be one indefinitely.

Desert Treasure II has a funky bonus game which is triggered by landing three or more map symbols on an active payline;  you will then be transported to an oasis where a nomad presents you with a choice of seven handsome chests from which you pick three.  Each will give you a cash prize and if you’re lucky, you’ll pick a treasure map which will give you the chance to visit either a hidden sanctum or a secret tent. Now you can pick from another selection of either jugs or plates of fruit for more cash prizes.

This is a five reel, twenty payline machine and the minimum bet for low rollers is just £0.01 per line.  If you like to splash out a bit more then you can bet £10 per line for a total wager per spin of £200. Desert Treasure II is a worthy addition to Playtech’s stable.