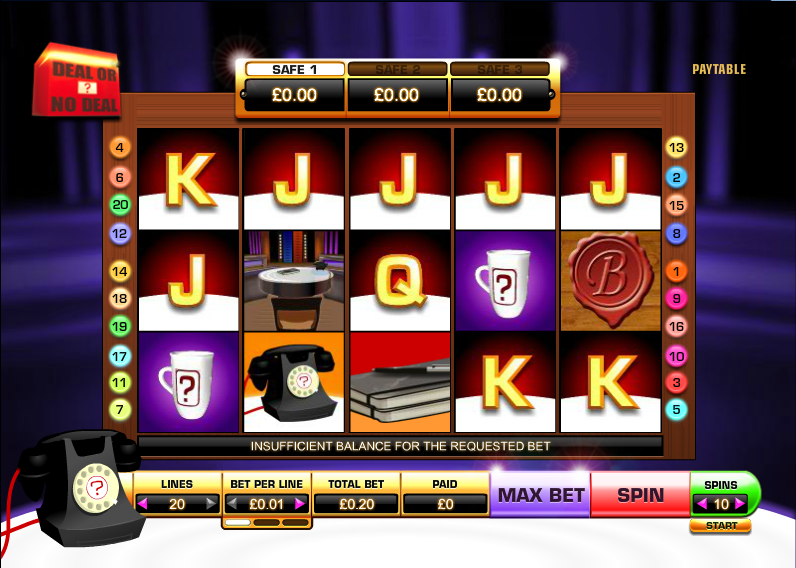 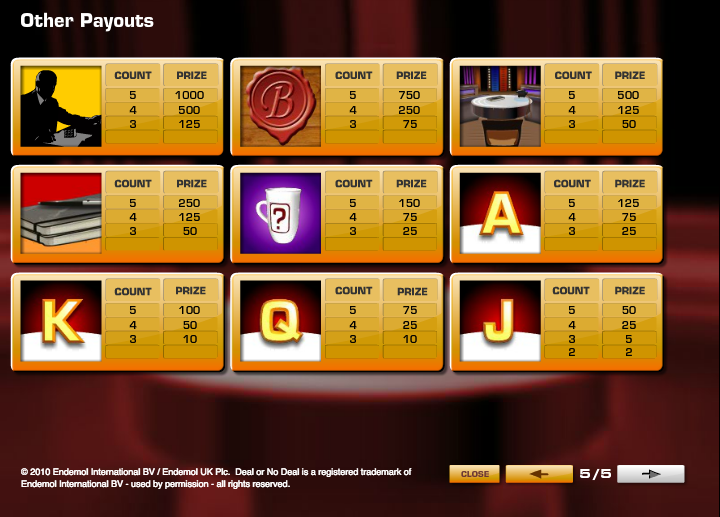 Anyone familiar with daytime television in the UK won’t need any introduction to Deal Or No Deal, the rather bizarre show fronted by Noel Edmonds in which contestants use blind luck to pick from a selection of boxes to win a prize. It’s fair to say that this new online slot from Endemol, while not requiring much skill, is like rocket science compared to the real thing. It’s also a sequel to the earlier World Slots version of this game.

The Banker’s Riches is a twenty payline and five reel game with several bonus features but it also has a progressive jackpot to add to the fun. Basic symbols are J, Q, K and A but the more valuable ones are items from the show including the famous mug, bank ledgers, the game’s circular centre point, the banker’s seal and the silhouette of the banker himself. Red and yellow boxes are the most valuable normal symbols.

The wild is represented by a Deal Or No Deal logo and there’s a scatter which is the famous black telephone.

The telephone scatter symbols is the key to the bonus features and by landing three of more anywhere on the reels it’s possible to win one out of three games as follows:

This is where you can win the progressive jackpot but you’ll have to be playing with maximum paylines to do so. First though you will be playing a version of the game from the television show so start by selecting one of the 26 boxes displayed. Six more boxes will then be opened and the banker will make you an offer which you can accept or refuse.

Accept and the game is over but refuse and you can continue like this until only your first selected box is left and that will be your prize. The progressive jackpot may be offered by the banker at any point but it is of course quite unlikely.

You can se the jackpot amounts in the various safes above the reels and which one you win depends on the level of your stake.

If you win this bonus option then the reels will begin to spin, ideally winning prizes for you until the banker symbol lands on reel three. All wins are doubled during this round.

With this option, the banker will offer you up to ten different prizes; you may accept or refuse each line but you’ll have to accept the final one which is made.

It’s an obvious tip really but make sure you are playing with all twenty paylines if you want to have a chance of winning the progressive jackpot.

The TV show may be rubbish but this game is good fun; three different bonus features and a progressive jackpot should keep you busy for some time.