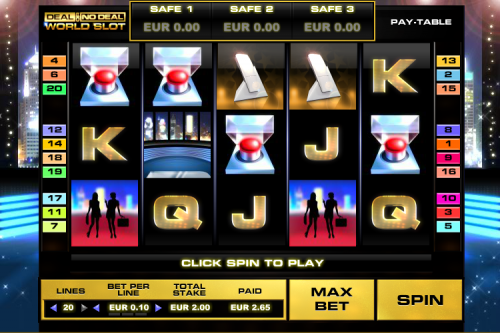 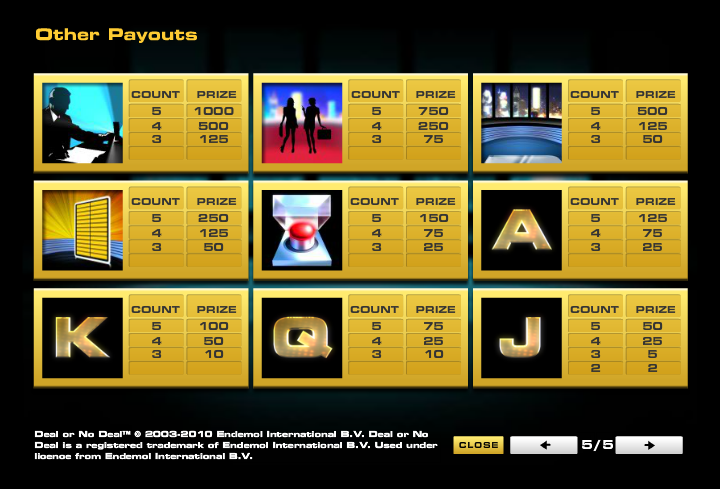 Here at slots central we have no idea what the attraction is of the television version of Deal or No Deal and we imagine it’s appeal will forever elude us.  A group of pointlessly intense contestants picking boxes at random doesn’t seem to be the recipe for an addictive show but clearly someone likes it.

The Deal or No Deal World Slot is an attempt to replicate the TV show and in our opinion it beats that show hands down purely because it’s an online slot machine.  It’s a five reel and twenty payline slot with a television studio as the backdrop; the lower value symbols are J, Q, K and A while the higher value symbols are things from the show – the red button, the prize money wall, the studio, some contestants, the banker and gold and silver briefcases.  The Deal or No Deal symbol is the wild and scatter symbol is the ‘famous’ phone.

What you get to do is pick briefcases one by one with each revealing a cash reward; every sixth case you will be offered a cash amount by the banker to end the game – if you accept the offer the game ends, if not you can continue through four more banker offers. If you decline all offers your final choice will be between the remaining case and the lucky case and that’s the amount you will win.

If you land three or more of the Deal or No Deal bonus symbols you’ll get to play one of two bonus games as follows:

Well this slot is ALOT better than the television show and it has a number of bonus features to keep you interested for longer than you might expect.  It’s well worth a few minutes of your time in our opinion.