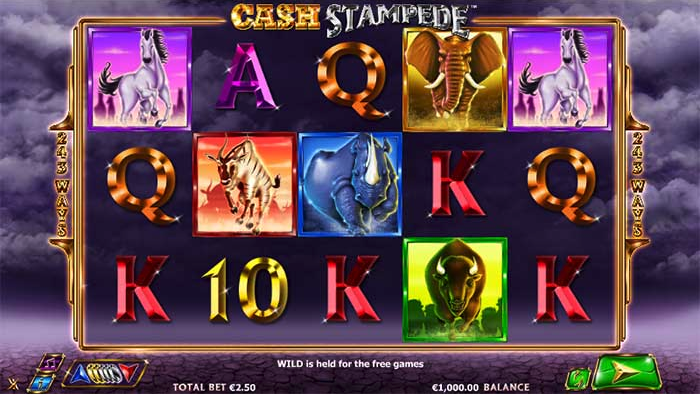 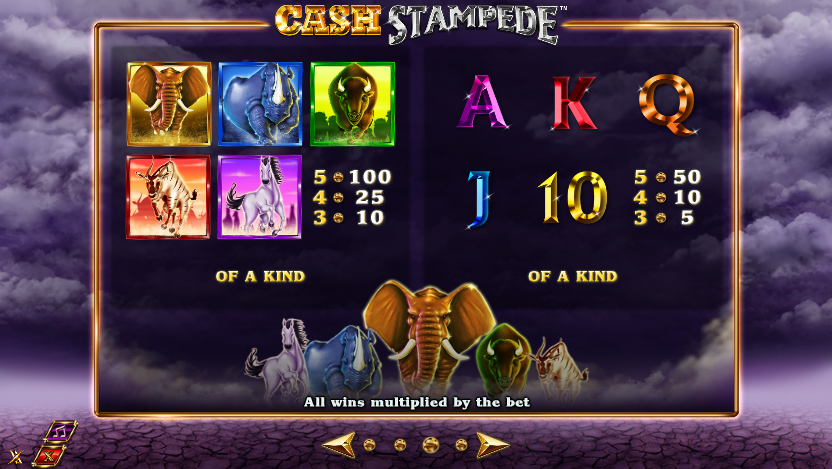 Brand new from NextGen Gaming is this online slot featuring herds of rampaging animals apparently all on a quest for money. It’s called Cash Stampede and it joins other recent releases from this developer such as James Dean and Starmania. It’s a glitzy-looking release with an enhanced free spins round a base game bonus feature so read the full review below for all the essential information.

Cash Stampede is a five reel slot with three rows and 243 ways to win which means that winning combos are formed as long as matching symbols are in adjacent reels starting from the left hand side. The backdrop to those reels is a parched landscape underneath a huge black cloud.

The five high value symbols are all shiny animals – an elephant, a rhino, a buffalo, a kudu (we think) and a horse. 10, J, Q, K and A are the lower values.

The Cash Stampede logo is wild and appears only on reel three and the scatter symbol is a big, gold ‘Bonus’ icon which appears on reels two, three and four.

This is a base game bonus feature which is triggered when you land an animal combo which includes the wild symbol on reel three. The wild and those animal symbols will be held for a respin and any more of that animal will also be held in place. This process continues until no extra matching animals land at which point the payout is awarded.

The free spins are triggered by landing three of the Bonus symbols on reels two, three and four and you will now receive eight free spins with a wild symbol frozen on reel three. As you can see from the video clip above it makes it much more likely to trigger the Cash Stampede during the free spins so there should be some big wins here.

To us, Cash Stampede looks like a new generation of NextGen slot and goof fun it is too with an easy-to-trigger bonus feature and some classy graphics. There’s a decent enough RTP of 95.27%.