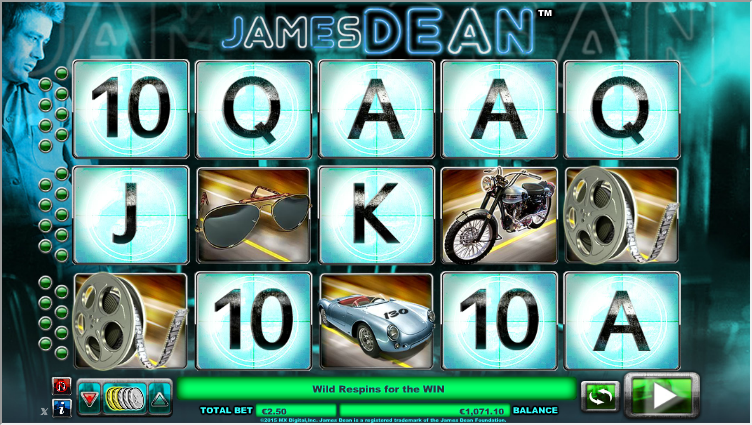 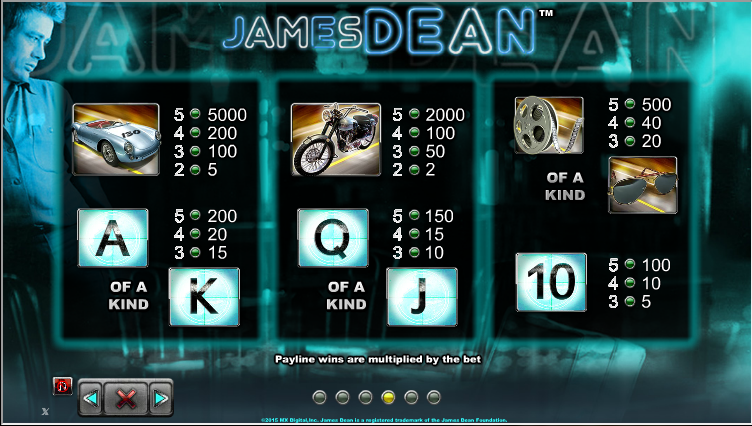 James Dean is surely one of the enduring cultural icons of the United States and clearly deserving of an online slot dedicated to his name; NextGen Gaming have come to the rescue in that respect and here we can bring you a full review of this game themed on an actor who starred in films such as Rebel Without A Cause and Giant but whose life was cut short at the age of 24.

The James Dean slot is a five reel machine with three rows and twenty five fixed paylines; the movie-themed reel positions spin against hazy backdrop with Dean himself on the left hand side.

The four high value symbols are movie items relates to the actor including a silver car, a motorbike, sunglasses and then a reel of film; 10, J, Q, K and A are the lower values.

One of the James Dean actors is the wild symbol (more details below), the Walk of Fame star is one scatter and the second is a different view of Dean.

Trigger this by landing three of the wild symbols on reels two, three and four; you will be awarded three free spins with an expanded wild on one of those reels. Additionally all prizes will be multiplied by 3x.

Three or more scattered stars anywhere in view will reward you with ten free spins with all prizes doubled. The clapper symbol appears during this round and each one will add up to three extra spins. These are called Legend Spins and are played at the end of the round, all prizes here are multiplied by 5x.

This is triggered by landing three of the Dean scatter symbols anywhere in view; it’s a picking game which offers the following:

Each win can be gambled and it’s possible to double or quadruple that amount by guessing the outcome of the turn of a playing card – use this option with caution.

James Dean features some slightly basic graphics but the multiple bonus features and atmospheric nature of the game more than make up for that. It’s good fun and well worth checking out with an RTP if 95.42%.