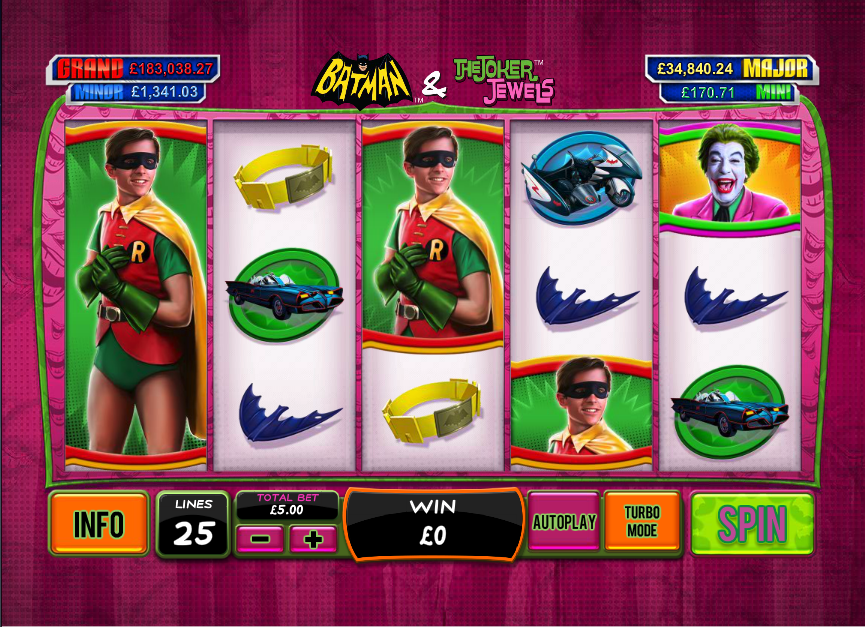 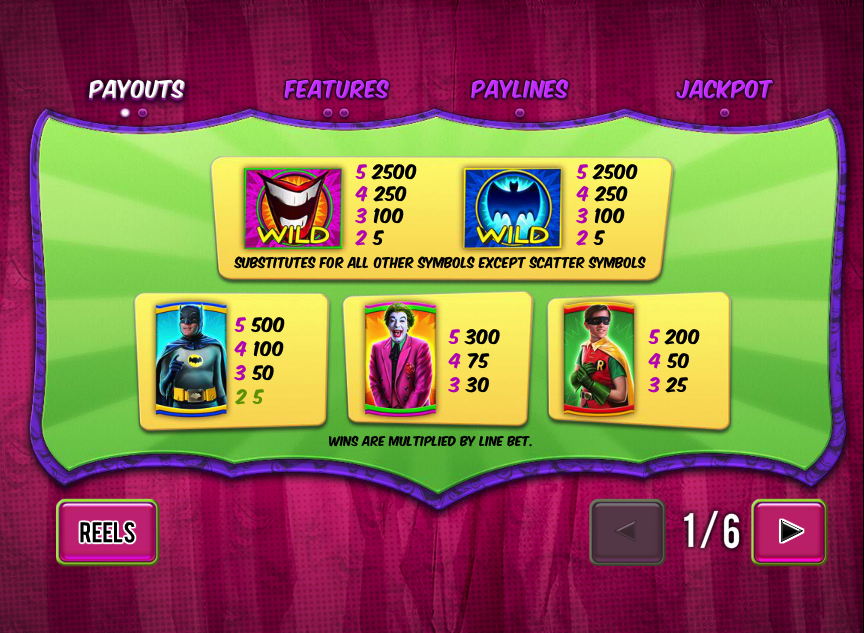 Batman & The Joker Jewels joins Batman & Catwoman to bring us two online slots based on the rather camp but very enjoyable 1960s TV show rather than the more modern versions of the Caped Crusader. It offers players free spins, random wilds and a progressive jackpot to dream about.

Batman & The Joker Jewels is a five reel slot with three rows and twenty five paylines; the design of the game is fairly basic but it suits the original television show well, as does the funky background music to accompany your gameplay.

The high value symbols are Batman, Robin, the Joker, the Batmobile, the Batplane, the Joker’s comedy gun, some false teeth, the utility belt and finally the Batarang.

The wild symbol is the batman symbol and it will substitute for all others to form winning combos except for the pink bonus icon.

Batman vs The Joker Free Spins

This is triggered by landing three of the bonus symbols anywhere on reels one, three and five; initially you must choose to fight on the side of Batman or The Joker and you will receive an unlimited number of free spins.

A split wild symbol now appears on reel three and whenever it lands the meter on the top will move towards Batman or the Joker; the side you chose will provide the biggest multipliers for any wins but when you reach the ‘End’ the round is over,

On any spin in the base game or free spins the Joker can appear and add up to nine Joker wild symbols to any position. This can produce some very big wins.

The DC Super Heroes Jackpot game can be triggered at any point while playing the game although the higher the bet, the greater the chance of getting there. You will get to play a game in which you must pick positions from the grid on display until you’ve found four matching colours which corresponds to one of the jackpots – Mini, Minor, Major and Grand.

Batman & The Joker Jewels is an excellent tribute to the original TV series and a fine slot to boot; the two features offer some hefty wins when triggered, the progressive jackpot is enticing and there’s a reasonable RTP of 95.01%.