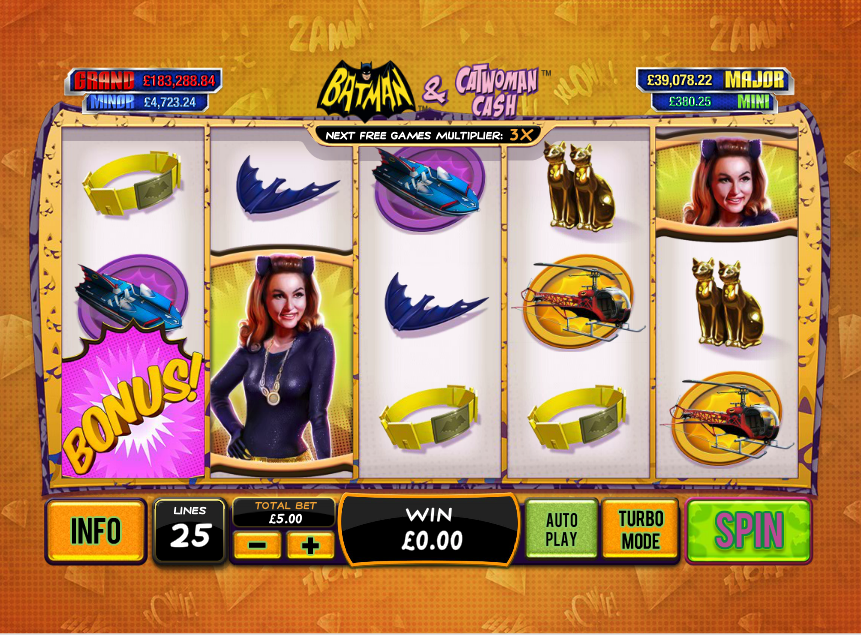 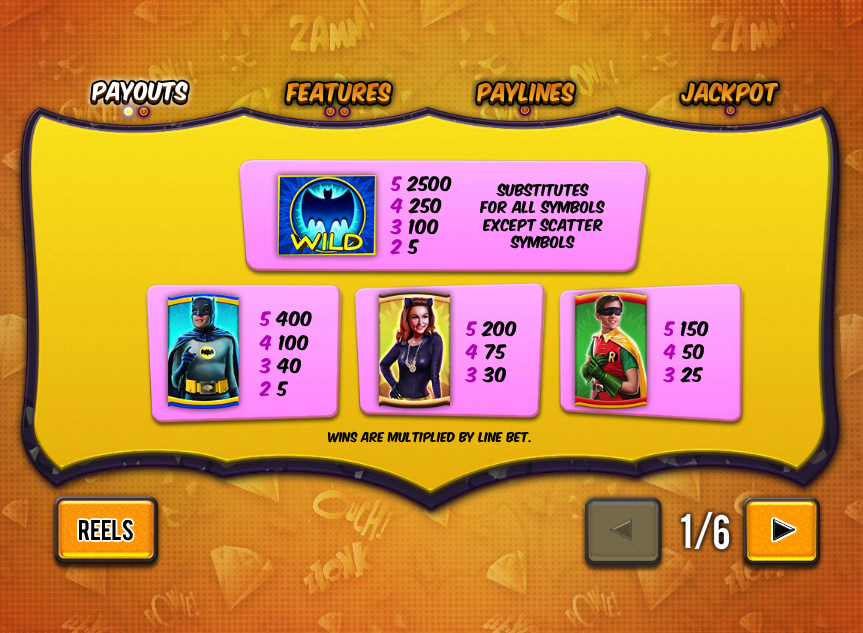 Fresh from the development studios of Playtech is this online slot machine based on two of DC Comics most famous superheroes – Batman & Catwoman. Refreshingly these are the characters from the 1960s TV show with plenty of camp costumes, bizarre exclamations and funky music. Read on to find out all about the enhanced free spins and the DC Super Heroes Progressive Jackpot.

Batman & Catwoman is a five reel slot with three rows and twenty five paylines; music from the original show accompanies your gameplay and there’s an attractive cartoonish design to the game reminiscent of that production.

All the symbols are related to the theme and include Batman, Catwoman, Robin, the Batcopter, Batboat, Batarang, Catwoman’s whip and mask, the utility belt and two gold cats.

Batman’s spotlight symbol is the wild symbol and it will replace all others to make winning combos except for the pink ‘Bonus’ scatter icon.

This is triggered whenever you land the Bonus icon on reels one and three; all you have to do is select one of those symbols to receive an instant cash prize or a +1x multiplier for the next free spins round. If that multiplier value is at least 2x, the triggering symbol become diamonds in the base game and will award cash prizes whenever they land.

This is triggered by landing three of the Bonus icons anywhere on reels one, three and five; now you must make one pick from Batman to determine the number of spins and one from Catwoman to reveal the multiplier (which is then added to the value collected in the Cat Burglar Bonus).

The DC Super Heroes Jackpot game can be triggered at any point while playing the game although the higher the bet, the greater the chance of getting there. You will get to play a game in which you must pick positions from the grid on display until you’ve found four matching colours which corresponds to one of the jackpots – Mini, Minor, Major and Grand.

Batman & Catwoman Cash is a really enjoyable slot with an admirable focus on the original TV series; the graphics, animations and sounds are spot on and the bonus features a well-thought out. The RTP is 95.11%.