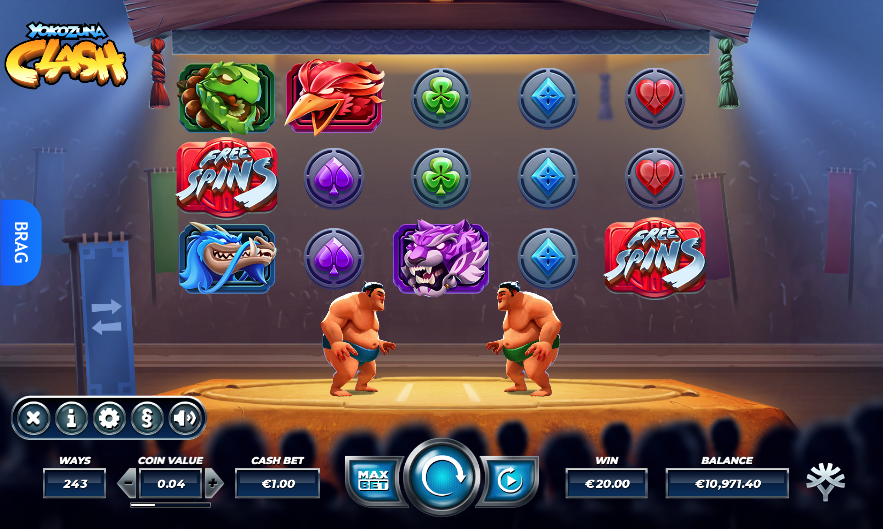 We’re not quite sure whether to describe Sumo Wrestling as a sport but that’s not important right now because it’s the entertaining theme of this clever online slot from Yggdrasil Gaming; it’s called Yokozuna Clash and it features a free spins round in which one of five wrestlers will battle to win money for you.

Yokozuna Clash is a five reel slot with three rows and 243 way to win which means wins are possible as long as there are matching symbols on adjacent reels starting from the left hand side. Two big lads face each other across the Dohyo in front of those reels while the audience looks on expectantly from the darkness behind.

The four higher value symbols include the red bird, the purple tiger, the green snake and the blue dragon; playing card symbols in similar colours make up the lower values.

The wild is a silver and gold ‘Wild’ which will substitute for all standard symbols to help create winning matches; the bonus symbol is the silver Free Spins icon.

Sumo fighters  appear in front of the reels and occasionally they’ll award mini-features; they also have a prt to play in the free spins:

A win will advance your fighter to the finals where you’ll fight Yokozuna for big wins.

On each 5-of-a-kind win the Sumo Clash is triggered and the fighters on screen will clash and up to four matching symbols from that winning combo will be added to other reel positions.

Yokozuna Clash is a brilliant slot with one of the most creative bonus features we’ve seen; there’s always something happening, mostly involving those Sumos at the front and this game comes highly recommended.