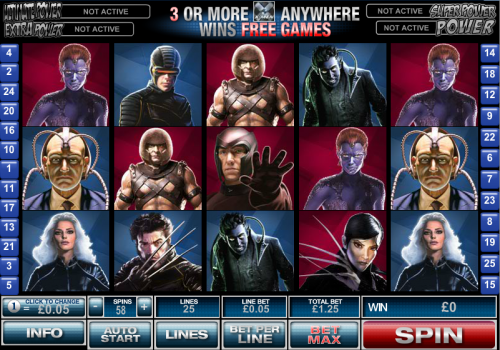 If there’s one thing better than a slot machine based on a group of superhero mutants, it’s a Playtech Marvel slot which combines the best of all worlds.  We have the excitement of X-Men action tied to Playtech’s terrific Marvel progressive jackpot network.

X-Men is a great-looking slot obviously based on the comic book series first of all but then the 2000 movie version starring Patrick Stewart, Hugh Jackman and what can only be described as a roll call of top acting talent.

The game itself sticks to the Marvel slots format but unusually for Playtech it does not feature the standard playing card symbols; refreshingly every symbol is an X-Men related picture or character.  From lowest value to highest we have Juggernaut, Cyclops, Beast, Storm – all the way up to Wolverine, Magneto and Professor X.  The wild symbol is a ‘wild’ logo and the scatter symbol is the X-Men logo.

It’s not a bonus game as such but whenever any of the five heroes form an ‘X’ shape in the centre of the reels you’ll win 5x the total bet.  It’s not a huge win but it crops up fairly regularly.

Landing three or more of the X-Men scatter symbols triggers the main bonus game and it can be a profitable one.  There are two aspects to it; the Heroes mode and Villains mode and the bonus game starts in Heroes mode where you receive unlimited free spins.  The spins continue until Magneto lands on reel 3 and Villains mode starts; there are 8 free spins here which count down unless Professor X appears to save you on reel 3, at which point you go back to unlimited spins in Heroes mode.

Eventually of course the free spins in Villains mode will run out and the bonus game is over at which point you’ve hopefully won a bit of cash.

All players are in with chance of randomly triggering the Marvel progressive jackpot and being in with a chance to win the Power, Extra Power, Super Power and Absolute Power prizes.  The more you bet, the greater your chance of starting the game.

The bonus game is the highlight of this slot and Playtech have once again managed to come up with an exciting and innovative game.  There are five reels and twenty five paylines meaning you can wager as little as £0.01 on one payline or as much as a jaw-dropping £1250 on 25 lines.