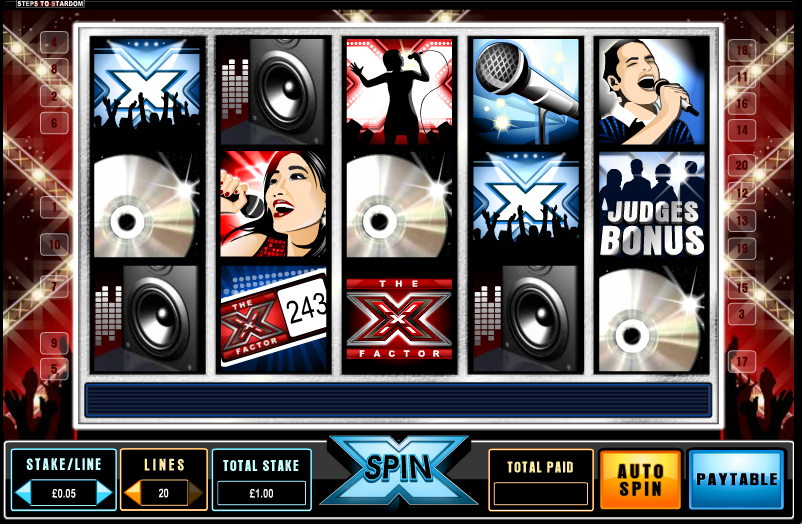 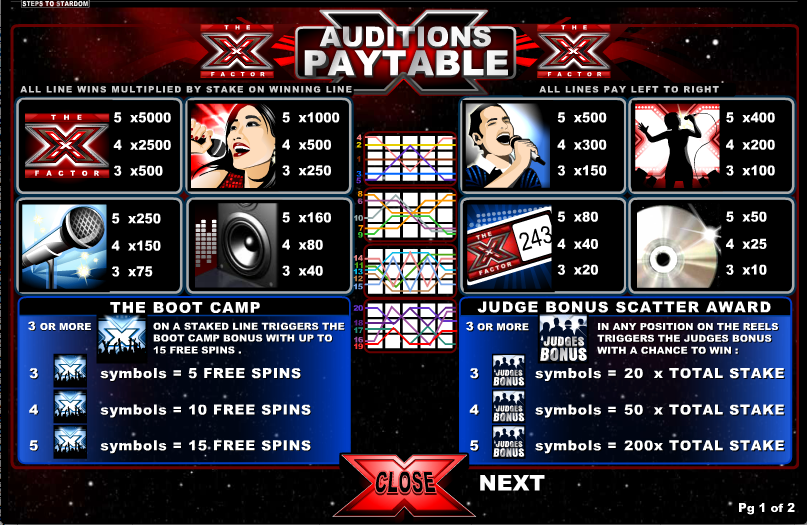 Television talent shows have been part of our culture for as long as there have been performers of dubious ability willing to step in front of a camera. Of course you need an audience as well and the popularity of these show is largely beyond doubt. X Factor is one of the biggest and fortunately Fremantle has taken the decision to convert it into an online slot for our enjoyment. Read on to find out more.

X Factor is a five reel and twenty payline slot which does a pretty decent job of bringing the television show to the reels. The music and the sound effects are straight from the show and the backdrop to the reels is a floodlit stage with the hands of the cheering audience just visible.

All the symbols are theme-related and include a CD, an audience ticket, a speaker, a microphone, a silhouetted singer, male and female performers and the X Factor logo.

There are two bonus symbols – a giant ‘X’ and a ‘Judges Bonus’ which both activate their respective features. Unusually there is no wild symbol.

In this game you can make it through to Boot Camp by landing three, four or five of the big ‘X’ symbols on an active payline. For that you will receive five, ten of fifteen spins respectively.

The spins start automatically and all the symbol combos are worth more than in the base game. During this feature you are also trying to collect silver stars, ten of which will gain you entry into the live show. During this stage the player will be offered three separate awards entitled Performance, Judges Verdict and Audience Reaction. Each is worth a cash prize and you can turn down the first and second but must accept the third.

This is a briefer mini-game and is triggered by landing three, four or five of the Judges Bonus symbols anywhere on the reels. You will then be faced with four judges and all you need to do is press the ‘Reveal Verdict’ button to display the first result – hopefully a ‘Yes’. This will win you a cash prize which can then be doubled up three more times by revealing the other judges results. If the answer is not ‘Yes’, that’s game over with no winnings. Check this round out in the video above.

For the best chance of triggering the Boot Camp feature, play with as many paylines as possible – it’s only triggered by symbols on an active payline.

This is good fun and it helps that it’s tied so closely to the atmosphere of the television show. The bonus rounds are both influenced by that show and this is well worth checking out.