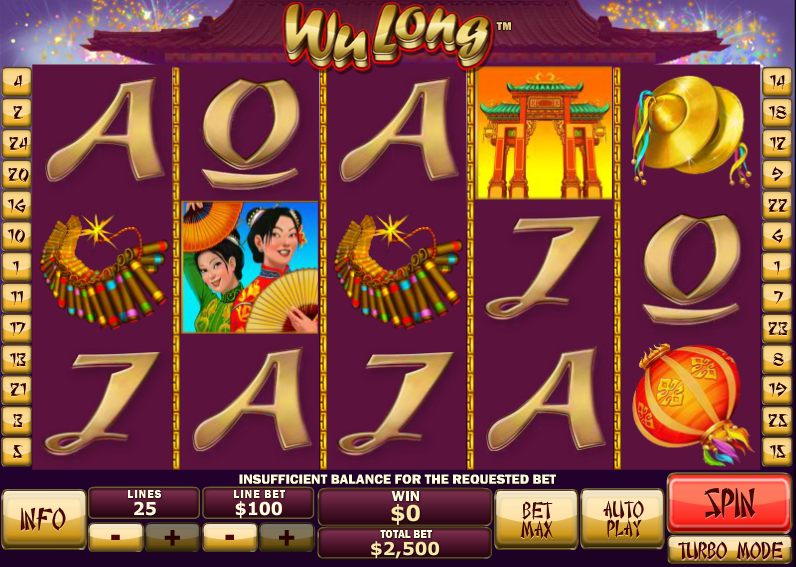 We’re heading to the mystical Orient once more to check out this brand new online slot from Playtech. We’ve not seen a new Playtech slot for a little while and we’re not quite sure what the title Wu Long refers to but there’s plenty of celebratory Chinese stuff going on here and a bonus feature with some added extras.

Wu Long contains five reels and twenty five paylines and those reels are set against a backdrop of a temple lit up by colourful fireworks. The low value playing card symbols have a Chinese feel to them but the higher value ones are all related to the theme. They include lanterns, fire crackers, cymbals, drums, traditionally-garbed ladies and a temple.

The dragon is the scatter symbol which activates the main feature and it’s also the wild which substitutes for all other symbols.

Those players who like free spins will be pleased to hear that there are twelve available if you can land three or more of the dragon scatter symbols anywhere on the reels.

Those initial twelve are just the beginning of the fun however – more free games can be won during this feature along with increasing multipliers if you can land more dragons.

More free spins can be won indefinitely and if you fail to land a dragon on a particular spin, the multiplier will decrease by one step.

The feature in this game is triggered by the scatter symbols which means that you can play with just one payline and still activate it. Your payouts will be proportionately lower though.

This game is similar to other Chinese-themed slots but it’s of a very high quality and the soundtrack is suitably Oriental. The main selling point is the feature though and the extras mean this is a game well worth checking out.