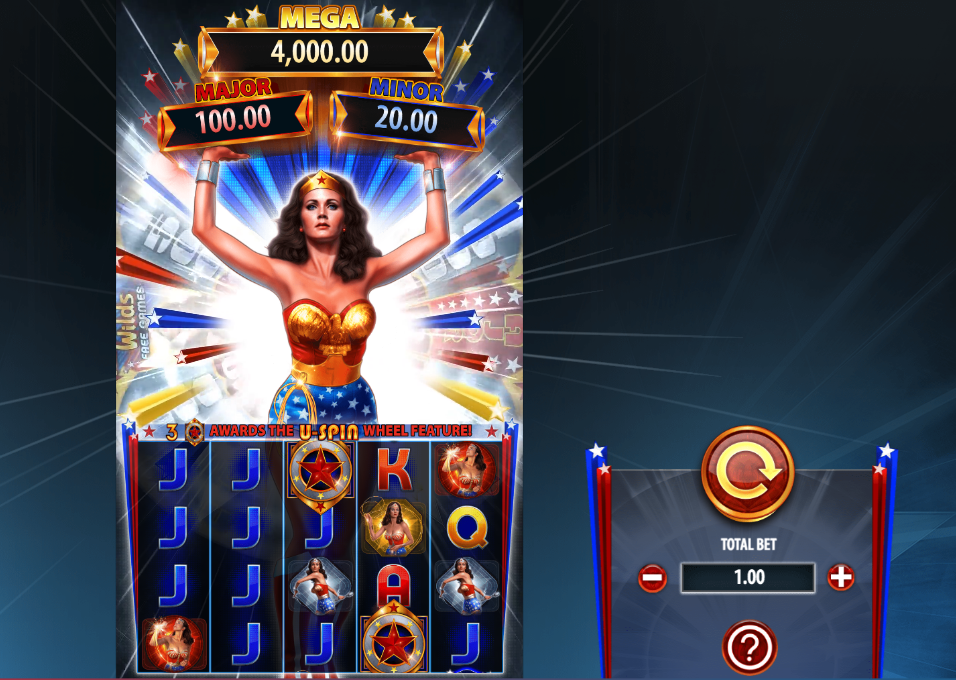 The 1970s television version of Wonder Woman is surely one of the most iconic for those of a certain age; we enjoyed Linda Carter playing Diana Prince as the crime-fighting Amazon and now we can enjoy her again in this online slot from Bally Technologies; it has the subtitle ‘Bullets & Braces’ and it includes several bonus features and some jackpot prizes.

Wonder Woman: Bullets & Braces is a five reel slot with four rows and forty fixed paylines (increasing to one hundred in the free spins); above those reels we have the lady herself , holding up the prize values in front of a spinning prize wheel.

The five high value symbols are all Wonder Woman in various dramatic poses along with J, Q, K and A as the lower values.

The wild is a big 1970s-style ‘Wild’ which will replace all other symbols to help form winning matches except for the shield scatter icon.

This is triggered by landing three of the shield scatter symbols anywhere on reels two, three and four; the wheel will now spin and award either a cash prize, one of the jackpot prizes or one the following features:

It’s not possible to retrigger the spins from within this feature.

On each spin a number of positions will appear as a red logo – when the spin stops these will all change into matching symbols.

Wonder Woman is a slot which channels the spirit of the television show pretty effectively and offers players a variety of themed features as well as those jackpot prizes; the shape of the game means it’s more suited to a mobile device but it can be played on any screen really and it comes with an RTP of 95.51%.