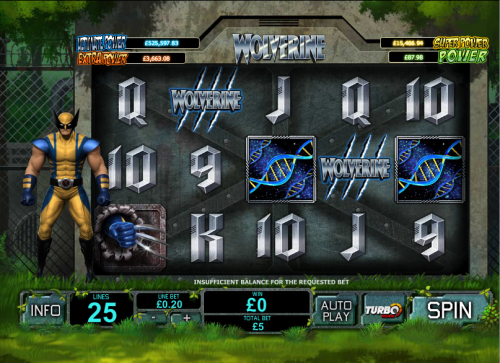 We haven’t reviewed one of Playtech’s fantastic Marvel slots for a while but there’s always room for a new addition to this franchise; now is a good time to check the new Wolverine online slot as it coincides with the release of the most recent film in the X-Men spin-offs.  Wolverine is of course the razor-fingered Logan whose skeleton is hardened by the addition of Adamantium.

This slot does indeed follow the format of other Playtech Marvel slots but that’s no bad thing – all of them are produced to the highest standards with a great range of bonus features.

Wolverine has five reels and twenty five paylines and the reels are inlaid into a huge metal door next to which our hero stands watch.  The main symbols are represented by dog tags, a DNA helix, a fist punching through metal and a muscle-bound enemy. 9, 10, J, Q, K and A make up the less valuable symbols.

Special symbols are a Wolverine logo scatter, a Berserker Rage bonus symbol, a syringe of Adamantium scatter and a Wolverine wild.  There’s loads of bonus features so read on to find out more.

Three or more syringes of Adamantium will win you twelve free spins but that’s just the beginning of this game; on the free spins screen you will see an Adamantium tank on the left – it has twelve levels and depending on whether you triggered the round with three, four or five syringes will decide whether you start the game with four, eight or twelve levels (i.e. full up).

With each spin, each wild (including stacked wilds) that lands will be injected and frozen with one level of Adamantium; landing a syringe will restock one level and when it’s all run out no more wilds be frozen in place.

Land the Berserker Rage symbol on reel five in the base game to trigger this mini-game; you’ll now get one free spin with 2 – 5 added wilds.  The position of those wilds depends on where the Rage symbols landed on reel five:

The Wolverine wild can be stacked or non-stacked on all five reels and it can also appear stacked in the free spins round.

This is partly why we’re here – to be in with a chance of taking part in the bonus game which could win us the giant Ultimate Power jackpot.  Failing that the Extra Power, Super Power or Power jackpots would do nicely.  The jackpot game is randomly activated but the more you bet, the greater chance of qualifying.

This is another great Playtech Marvel slot packed with loads of bonus games; it has an appropriately adventurous soundtrack and looks as good as one would expect.