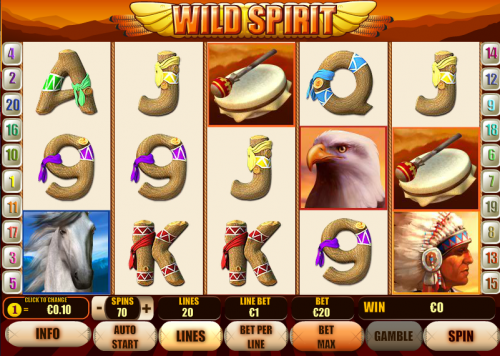 Plenty of online slots are based on ancient eras of human history and on this website we’ve reviewed games from ancient times including Greek, Roman and Viking.  These periods can usually provide something on which to base a bonus game or two and that’s the case with Wild Spirits from Playtech.  It’s a really nice-looking game  based on native American culture with some great graphics and slightly mystical-sounding background music.

Wild Spirits is a five reel and twenty payline slot set against the background of the sun setting over a mountain range.  The basic symbols may just be playing cards but each one is a carved piece of wood with colourful material attached.  Higher value symbols are an eagle, a drum, male and female warriors and a white horse.

The white horse is the wild symbol and the bonus game can be triggered by landing the male native American.

This slot includes a bonus game with a bit extra; you trigger the feature by landing the male warrior on reels one and five in the basic game and this will kick off the process.  As you can see from the video below the first thing you will do is pick from the various symbols on the screen; keep picking and revealing fee spins and multipliers until you uncover a burning symbol – your spins will then begin.

We wouldn’t normally comment too much on a game’s animations but they’re worth a mention here; every time you create a winning combo including one of the higher value symbols you’ll get a great mini-movie featuring that symbol.

If you’d like to gamble your most recent winnings just click the ‘Gamble’ button underneath the reels.  You’ll then go to a screen where you’ll be asked to gamble half (double half) or all (double) of your winnings.

Pressing the appropriate button will begin the game by uncovering the card to the left of the five shown.  You will then have to find a higher card – that’s all there is to it.  If you win you can continue, if not you will return to the game empty handed.

Playtech appears to be catching up with some of the other companies in terms of quality of graphics and Wild Spirits really does look good.  The bonus game also adds a few nice touches.