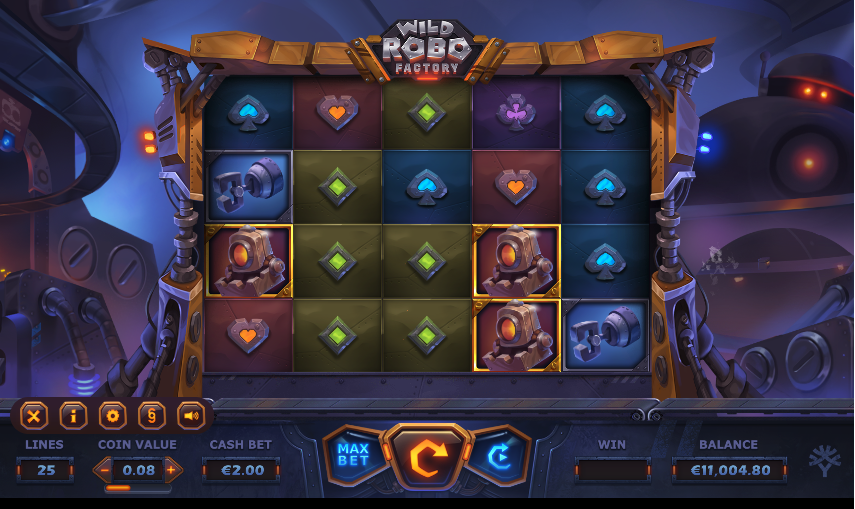 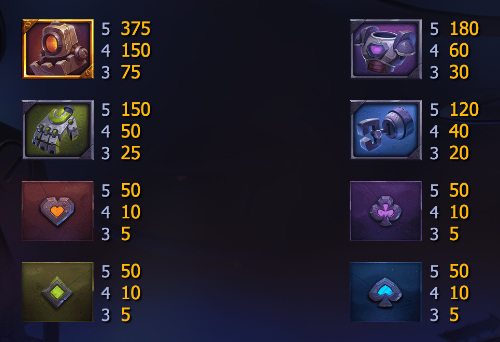 This releases from Yggdrasil Gaming is an online slot machine set in a futuristic world in which robots rule the roost; it’s called Wild Robo Factory and it offers players randomly-activated free spins and a wide variety of wild wins.

Wild Robo Factory is a five reel slot with four rows and twenty five fixed paylines; all the action is set in a mechanical world where huge machines perform mysterious tasks overlooked by the robots of this theme.

The four high value symbols are various constituent parts of robots, limbs and suchlike while playing card symbols in orange, purple, green and blue make up the lower values.

The wild symbols are the robots and aside from the usual substitutions they are a large part of the feature described below; the Free Spin robot is the bonus symbol.

The wild symbols are the larger parts of robots and rather than appearing in reel positions they’ll emerge on reels three, four or five and slowly make their way to the left on the automated conveyor belt; whenever this happens the Robo Respins are triggered and these free spins will continue while there are robots in view. The robots can appear as one reel position or larger stacked ones which fill up the whole reel – some can also have a 2x multiplier attached.

This is triggered by landing three, four or five of the Free Spin robot symbols anywhere in view for which you’ll be awarded 5, 10 or 15 wild robots; the free spins will last until the last of those robots has moved across the reels to the left hand side.

During the free spins round the System Overload may trigger in which the conveyor belt will change direction and the robots will start moving in the opposite direction. This is obviously a good thing.

This is a minor feature in which low value symbols may be transformed into high value ones if a win is made possible by doing so.

Another release and another very enjoyable slot from Yggdrasil Gaming – Wild Robo Factory creates a faintly dystopian atmosphere and bombards us with great graphics and clever wild features. Get to the free spins round for the biggest wins.