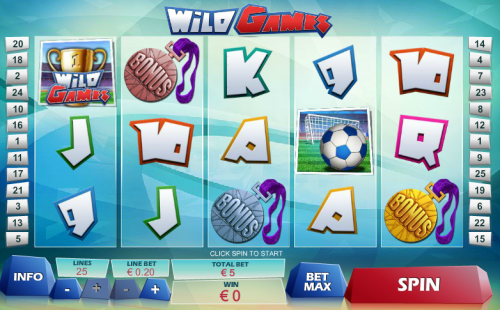 There are plenty of sports-based online slot machines out there and there are also a number of animal-related games; we’ve reviewed several of either but this is the first we’ve seen to combine both those subjects.  Wild Games from Playtech introduces us to three animal competitors in this sporting competition and there are enough bonus games to keep everyone happy.

This slot has five reels and twenty five paylines and the game revolves around trying to trigger the bonus games which allow you to play the games.  The basic symbols are represented by 9, 10, J, Q, K and A but the higher value symbols are a basketball and a football.

There’s loads of special symbols and we’ll start with our three characters which are a bulldog, a cheetah and a hippopotamus; there’s also bronze, silver and gold medals and a Wild Games trophy for the wild symbol.

These bonuses are triggered by landing the character stacked wild on reel three and there are three different athletic events to be won as follows:

If you can land three or more medals of the same colour you’ll be given the option to select a highlighted medal in return for cash.  Gold medals return more cash than silver which rewards more than bronze.

This is a really clean, crisp-looking game with an excellent variety of bonus games to keep everyone amused.  The graphics and animations are top notch and the only thing missing is an Autoplay button.