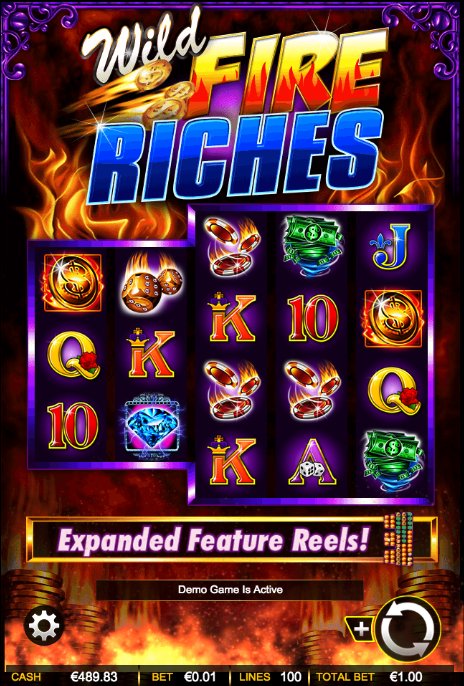 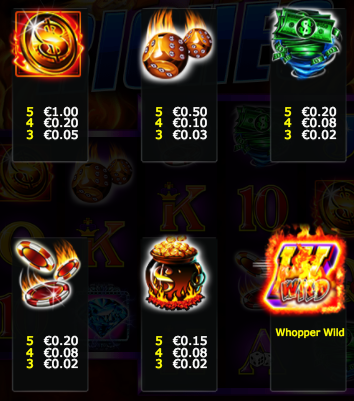 Everything appears to be on fire in this online slot from Ainsworth Gaming, so much so that if you put your hands close to the screen you can almost feel the heat; it’s called Wild Fire Riches and you can find out how to put the fire out below.

Wild Fire Riches is a five reel slot with three/four rows and one hundred paylines; animated flames heat the reels from below while above them more flames add to the slightly satanic atmosphere.

The are five higher value symbols, mostly on fire and they include a burning gold dollar, some flaming dice, a stack of banknotes, some toasty casino chips and a boiling cauldron of gold.

The main wild symbol is a sparkling diamond which will replace all others to help form winning symbols except for the Wild Fire scatter, the Wild Fire wild (also a scatter appearing on reels four and five) and the Whopper Wild which appears only on reel three. When it appears the Whopper Wild will transform all symbols on reels on three, four and five into  wild diamonds.

This is triggered by landing three or more scatter symbols anywhere in view for which you will receive eight free spins. Before the spins start you will see that the reels have expanded so that there are nine rows on reels one and two and twelve rows on reels three, four and five.

There are no wild diamonds during this round and neither are there any of the lower value playing card symbols; there’s a Mega Whopper Wild which can appear on reel three and which will transform all symbols on reels three, four and five into the same symbols which are on reels one and two.

Two extra spins are added if you can land three more scatters anywhere in view.

There’s some interesting gameplay and features in Wild Fire Riches and in our experience the Whopper Wild lands quite regularly with the potential for some big wins. This is perhaps a game best played on a mobile device and it comes with an RTP of 94.13%.