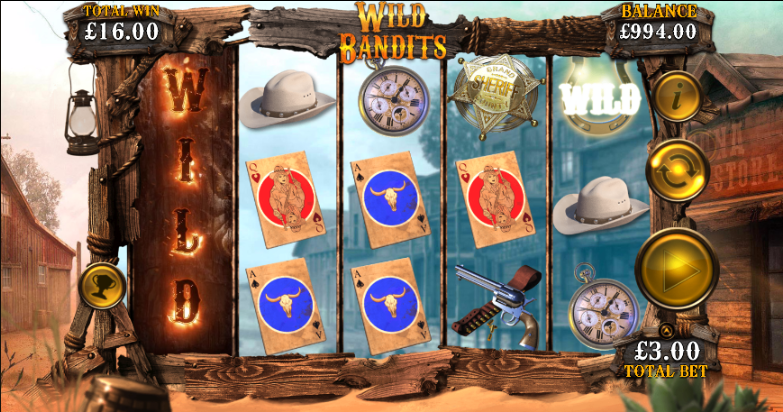 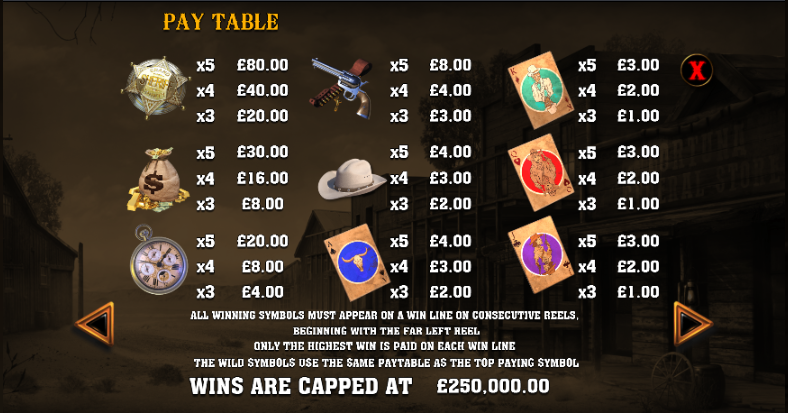 A journey to the Old West is never complete without a chance to spin the reels and here we have a cowboy-themed online slot called Wild Bandits; it’s developed by OpenBet, it includes some clever bonus features and you can read all about it below.

Wild Bandits is a five reel slot with three rows and fifteen fixed paylines; those reels spins within the confines of a shaky wooden structure which could be a hangman’s platform but probably isn’t.

The higher value symbols on show here include the Sheriff’s badge, a bag of cash, a pocket watch, a revolver and a stetson hat; four coloured playing cards represent the lower values.

The wild symbol is a glowing horseshoe which will substitute for all others to help form matching combinations except for the moustachioed bandit bonus icon.

This is triggered by landing three of the bandit bonus symbols anywhere on reels one, three and five for which you will receive 15 free spins (or Wild Deals as they are called in the game). Large Wild Bandits will now appear on the reels in the following sizes:

If a bandit lands on the reels, any wins are paid out and then you will be offered a bribe by that bandit to release him/her; if you decide to keep the bandit on the reels the next offer will be a bigger one (if another bandit lands). At the end of the spins that bandit will be jailed and a mystery prize awarded.

On any base game spin a random number of symbols will be shot and replaced by wilds for a potentially big win.

On any base game spin a stick of wild dynamite will land on reels three, four or five and turn that entire reel wild; you’ll now receive free spins with the wild moving west (left) one reel at a time until it falls off the edge.

We don’t usually regard achievements as particularly useful but in this case they serve a purpose; releasing all bandits for a bribe or jailing all the bandits will guarantee wins if the Wild Shootout or Wilds West features are respectively triggered. In this way the RTP increases from a slightly paltry 92.61% to 96.85%.

Wild Bandits is a slot which rewards longevity through the achievements feature but it’s also got a lot more to offer with some high quality graphics, multiple bonus features and some player input also – check it out!