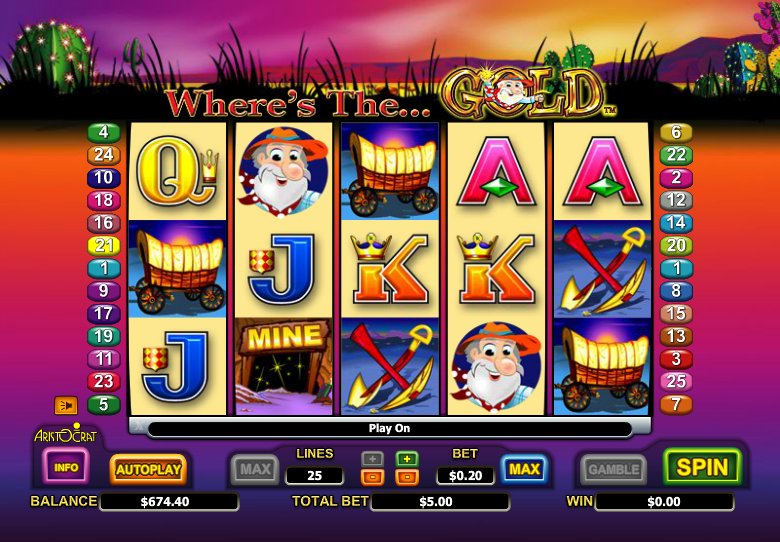 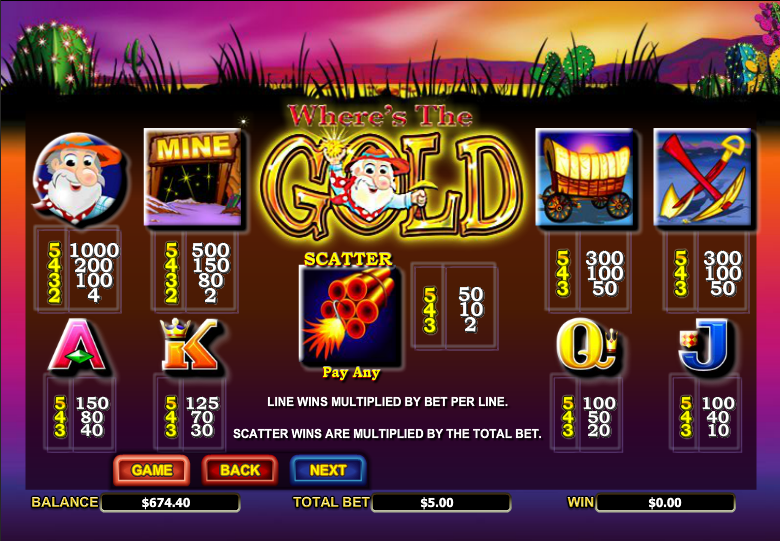 A trip into the depths of a gold mine awaits those wanting to check out this online slot from Aristocrat Gaming; it’s called Where’s The Gold and although it might look a little bit basic it does have an interesting bonus feature and an opportunity to gamble your winnings. Read our review for more detailed information.

Where’s The Gold is a five reel slot with three rows and up to twenty five paylines and in terms of time, this looks like the California gold rush which occurred in the middle of the 19th century. Our main character is a cheerful white-haired prospector who looks like he’s just struck gold.

There are four high value symbols including the prospector, the mine entrance, a wagon and a crossed pickaxe/shovel; J, Q, K and A represent the lower values.

There’s no wild symbol during the base game but there is a scatter icon represented some sticks of dynamite which activates the single feature.

This game is triggered by landing three, four or five of the dynamite scatter symbols anywhere in view and you will now be taken to a screen displaying six characters (see Video above). Pick one and in the box below a random number of gold nuggets will slowly appear along with base game symbols.

The number of gold nuggets determines the number of spins awarded while the symbols which appear will act as wilds during the spins – they also become gold so are easy to spot. Those wilds substitute for all others except the dynamite and it’s also possible to re-trigger more spins by landing more scatters.

Any win can be gambled by clicking the ‘Gamble’ button below the reels; this opens a screen offering players the choice to double of quadruple that win by correctly guessing the colour or suit of the next playing card drawn. You can guess correctly up to five times but any wrong answer will forfeit your winnings.

Where’s The Gold is a bit dated now but not without it’s merits – particularly the quirky free spins round. The gamble feature is probably best avoided but overall Where’s The Gold is worth a few spins – there’s an RTP of 94.92%.