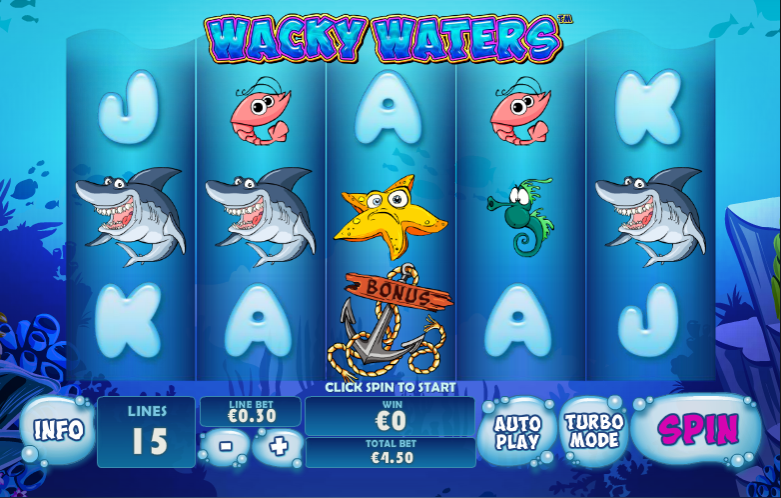 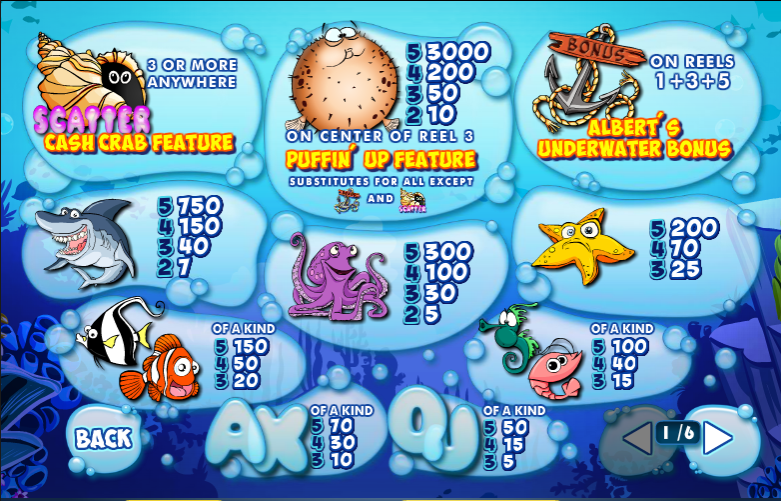 The murky depths of the ocean is a familiar environment for online slots fans and it’s now time to take another deep breath, dive below the waves and check out this chirpy game from Playtech; it’s called Wacky Waters and it’s a feature-filled release with lots of cheerful characters and a jaunty soundtrack – read all about it below.

Wacky Waters is a five reel slot with three rows and fifteen fixed paylines; there’s a familiar look to the design and through the transparent reels there’s a vista of roaming shoals of fish and underwater fauna in the blue haze.

There are lots of fishy symbols – the shark, octopus, starfish, striped tropical fish, seahorse and shrimp – along with the standard J, Q, K and A.

The puffer fish is the wild symbol and it will substitute for all others except  the bonus anchor and the scatter crab, both of which activate extra features.

If you can land the puffer fish on the centre position of reel three he will puff up and eventually deflate, flying around the screen and depositing up to six extra wilds on the reels; any new wins are now reevaluated.

This is a picking game which is triggered by landing three of more of the scatter crabs anywhere in view for which you will receive:

Just pick from the crabs on the reels for a cash prize and if you find the special crab you’ll win 100x your bet.

This is triggered by landing three of the anchor bonus symbols on reels one, three and five; initially you must pick a route for Albert to float along and he will pick up spins, wilds, multipliers and more air. When he’s runout of air the free spins will being with all the collected items, as you can see from the video above.

Landing three more anchors will add eight more spins but you won’t get to play the Underwater Bonus again.

Wacky Waters is a decent addition to the massed ranks of ocean-themed slots and it’s got lots of  easily-triggered bonus features which is always a good thing. It’s very cheerful, well worth a go and comes with an RTP of 95.58%.