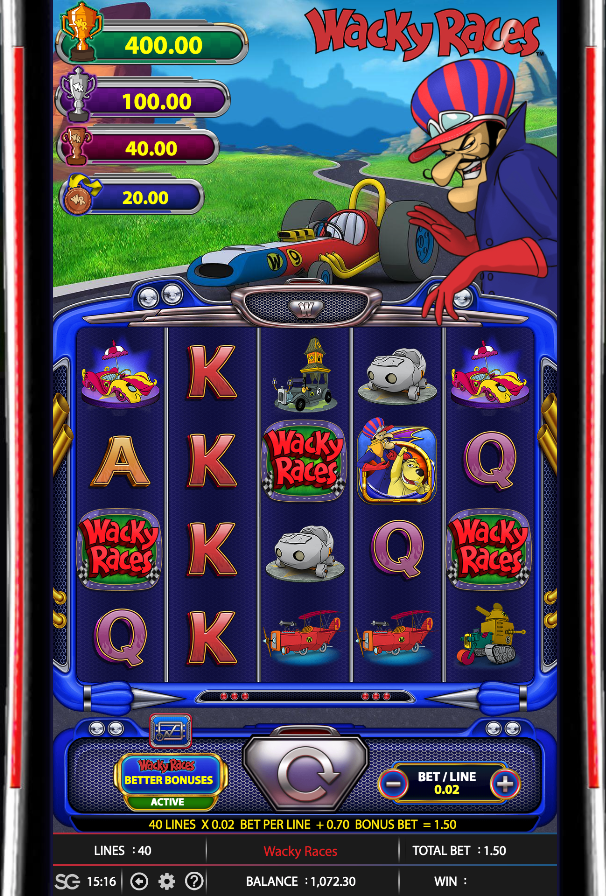 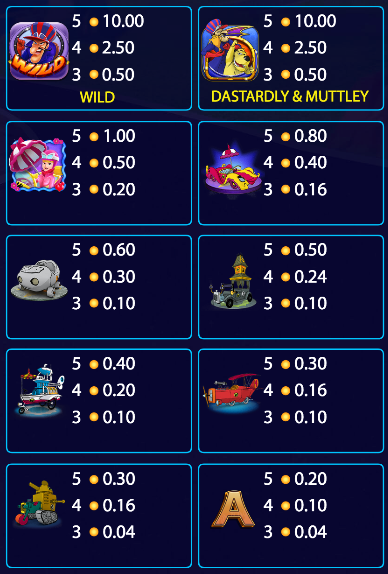 It’s probably fair to say that Saturday morning television hasn’t been the same since the adventures of Penelope Pitstop and her fellow racers stopped being broadcast; that show was of course Wacky Races, Hanna-Barbera’s classic cartoon about a never-ending car race across the desert. It’s also now an online slot of the same name from Bally Technologies and you can read all about it below.

Wacky Races is a five reel slot with four rows and forty fixed paylines; those reels spin on the dashboard of a car behind which stands the evil Dick Dastardly, grinning and moving oddly as the tarmac stretches into the distance.

The higher value symbols comprise Penelope Pitstop and assorted vehicles from the show – the Compact Pussycat, the Boulder Mobile, the Creepy Coupe, the Convert-a-Car, the Crimson Haybaler and the Army Surplus Special; Q, K and A make up the lower values.

Dick Dastardly and Dastardly and Muttley are wild in the base game and they will replace all others to form winning combos except in the following circumstances:

Some of the above symbols only appear during the features.

This is triggered by landing three of the Wacky Races/Wacky Races wild symbols anywhere on reels one, three and five; as you can see from the video above you’ll now get to watch a race with five cars, the winner of which will reveal a particular feature. If the car which wins is noted beforehand (or you’ve activated the ‘Better Bonuses’ option) you’ll also receive a feature enhancement:

The ‘Better Bonuses’ option can be turned on and off below the reels and adds 50% to your total stake.

During each base game spin, stacks of symbols on the reels will all be transformed into two or three of the standard symbols.

During any base game spin, at least one reel will be completely wild

Wacky Races is a customarily complex slot from Bally Technologies but once you’ve worked it out it’s a lot of fun and it channels the spirit of the original cartoon very well. The bonuses and features hit regularly and there’s an RTP of 96.03%.