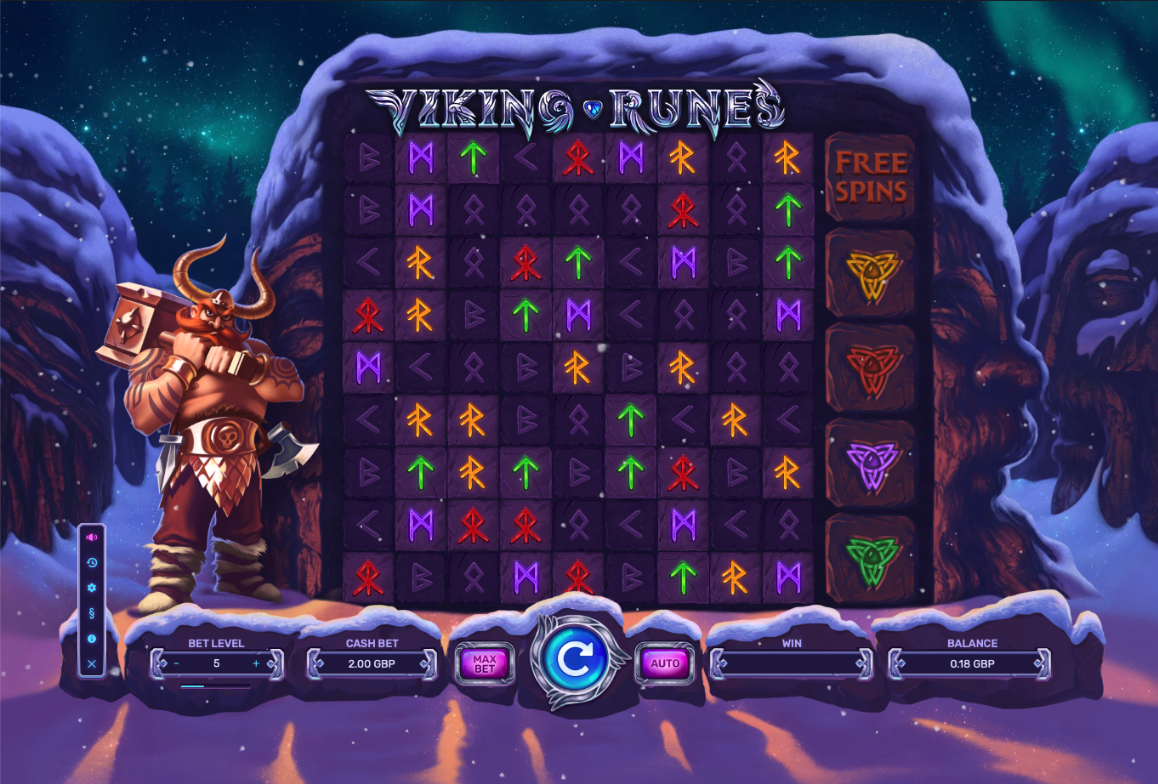 The chilly weather of Scandinavia awaits any online slots players who’d like to try out this Viking-themed online slot from Yggdrasil Gaming; it’s called Viking Runes and from £0.40 per spin it tempts us with arcade-style gameplay, base game features and cascading symbols leading to free spins.

Viking Runes plays out on the 9 x 9 grid shown above with the large tattooed viking standing to the left, apparently unconcerned by the freezing snow falling around him. The aim of the game is to land clusters of at least six matching symbols connected vertically and/or horizontally after which they’ll disappear and be replaced by more falling in from above, hopefully continuing the process.

Sevens runes and three gems in red and blue make up the theme-related symbols; the regular wilds are the glowing blue objects but more will come into play as the game progresses towards the features as we shall see below.

During the base game and free spins the following features can be activated by the giant viking at random:

Each subsequent cascade will light up and create a new wild symbol from the four show on the right hand side; with each cascade each one that’s active will be added back onto the reels to try and keep the fun going. When the wins run out this round is over but if you can spin five cascades in a row the free spins round will be activates.

When the free spins are activated you’ll receive six and during this round the lightning wilds (which have remained active) will feature win multipliers which gradually increase.

We enjoy a cluster-based slot every now and then and Viking Runes is a prime example of how to design a good one; it’s all here – cascading reels, a manageable route to the free spins and various random features. Try it out!

Viking Runes is a viking-themed arcade slot played on a 9 x 9 grid with a cluster payline mechanic.

Yes! Cascading reels leading to extra wilds and free spins plus the Runes Shuffle, Viking Sorcery and Spell of Ancestors.

The Return To Player percentage for Viking Runes is 96.20%.

How To Win On Viking Runes?

Where can I play Viking Runes?